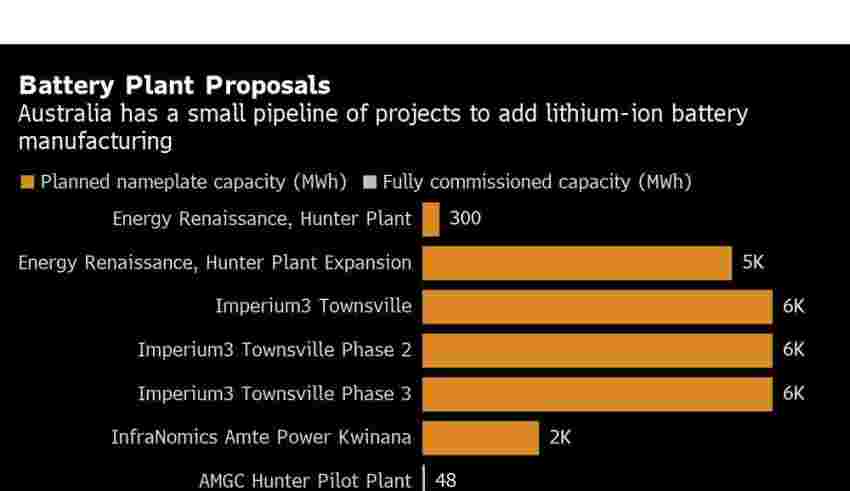 (Bloomberg) — An Australia-based startup is planning a A$300 million ($210 million) factory to build lithium-ion batteries free of materials from China, as automakers to utilities seek alternatives to the industry’s dominant producer.

Recharge Industries Pty aims to start construction on the site in Geelong in southeastern Australia in the second half of this year and begin production by late 2024, founder David A. Collard said in an interview.

The operation will have an initial annual capacity of 2 gigawatt-hours — rising to an eventual planned total of 30 gigawatt-hours — and has sales agreements in place with Indian energy storage projects, he said.

“Australia is the new Saudi Arabia of the new energy age,” said Collard, a former PriceWaterhouseCoopers LLP partner. “We have all the key critical minerals to power the next 100 years.” The nation currently has a pipeline of 25.6 gigawatt-hours of battery production projects, according to BloombergNEF data.

Nations including the US, Australia and India are pushing to expand domestic clean energy manufacturing capacity to help drive their shift away from fossil fuels, all while also attempting to curb their reliance on imports — particularly from China. President Joe Biden’s Inflation Reduction Act, which includes generous incentives for solar, battery and electric-vehicle manufacturing, has sparked a wave of new factory announcements in the US.

Australia is the world’s largest supplier of lithium, a critical battery metal, though currently sends the majority of its battery raw materials to be processed into components in China. The Asian nation currently has about 1,000 gigawatt-hours of cell manufacturing capacity, more than 80% of the world’s total, according to data compiled by BNEF.

Collard raised funding for Recharge through his hedge fund, Scale Facilitation, and backers include Australian superannuation funds, asset managers and strategic investors involved in the project, he said.