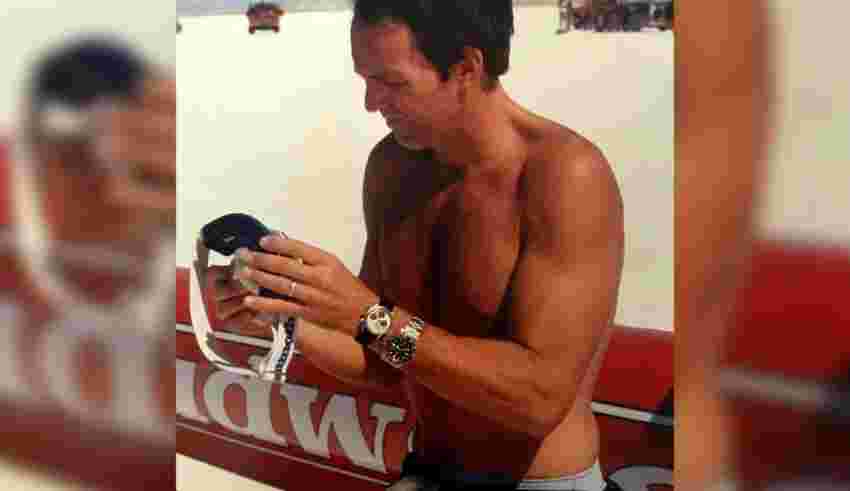 The patinated timepieces are expected to fetch beaucoup bucks.

An engraved wristwatch is a damn intimate gift. Worn snug against the radial artery, these metal mementos accumulate sweat, grime, and wear over the years, eventually evolving into patinated relics assuming they’re not lost or stolen, or given away.

Paul Newman’s infamously eponymous 1968 Rolex Daytona, inscribed with his wife’s plea, DRIVE CAREFULLY ME on the caseback, became the stuff of legend as being Blue Eyes’ daily watch long before it traded hands for a record $17.7 million in 2017. Three Rolexes with similarly intriguing stories – two of which are Newman-related – are crossing the block at Sotheby’s Important Watches auction on December 9 in New York, and they’re all but guaranteed to fetch an eye-opening haul.

For details on their storied history, we spent a couple hours chatting with their soon-to-be-ex owner, Hollywood stuntman and Paul Newman’s dear pal, Stan Barrett.

Before we go full geek on the wrist candy, some background on their owner and famous gift-giver is in order. Stan Barrett is a classic adventure-chaser, and his stunt work for actors like Steve McQueen, Paul Newman, and Burt Reynolds put him in some heady Hollywood circles.

His friendship with Newman started auspiciously on set. “I told him not to start my motorcycle,” the 79-year-old remembers, explaining to the star that if started improperly, it would break his leg. “I’ll bet I didn’t say five dozen words to Paul on that picture,” Barrett recalls, but apparently the words didn’t sink in: while Barrett was in the hospital getting an injection for a back injury, Newman attempted to kick start the bike, and promptly broke his ankle.

“He was a special guy, man. He was really quiet and unassuming, never tried to draw attention to himself, ever.”

After reconnecting again, Newman suggested coming up to Barrett’s for a ski excursion at Mammoth Mountain, which was owned by Barrett’s parents-in-law. What was supposed to be an overnight stay turned into a week. “That’s how we became such good friends,” Barrett reveals, adding that “two straight guys couldn’t be closer.” Despite Barrett being a devout Christian and Newman being an atheist, he says the two “never had an argument on either our politics or faith, or lack of it.”

Their four-decade friendship left Barrett heartbroken when Newman passed away in 2008, saying it was “really tough to lose him. He was a special guy, man. He was really quiet and unassuming, never tried to draw attention to himself, ever.”

Newman was also notoriously generous to those in his inner circle, and Barrett says he was the frequent recipient of gifts from the world-famous actor including paintings, clothes, and yes, watches. Barrett says he first received a timepiece from Newman when he was 32, and was sometimes handed over timepieces that had Velcro bands because the actor enjoyed knowing the time while playing badminton.

Though he was gifted several watches from Newman over the years, the two featured in the upcoming auction were more significant than the next: a Rolex 1675 GMT Master “Pepsi” circa 1977, and a Rolex 6262 Daytona circa 1969. The 40mm stainless-steel GMT has a Rolex Oyster riveted bracelet and is accompanied by a Rolex Official Chronometer Certificate dated June 1978. The caseback was later engraved with the message, “STAN BARRETT 739 MPH MACH 1.0106 12-17-79”.

The well-worn 37.5mm Daytona was owned and worn by Newman before he gifted it to Barrett, and thus wears a blue Velcro strap. The auction listing also mentions a stainless steel Rolex Oyster bracelet with a folding clasp, as well as a Rolex service box and booklet. While Sotheby’s estimates between $50,000 and $100,000 for the GMT, the considerably rarer and more significant Daytona is estimated to fetch between $300,000 and $500,000—and both could very well sell for significantly more.

The Daytona was presented to Barrett ahead of his impending attempt to break the sound barrier in 1979. The audacious goal was organized by stuntman, Smokey and the Bandit director, and Oscar winner Hal Needham, who reportedly put $1M of his own money into the project and chose his friend Barrett to pilot a Budweiser-sponsored rocket car. The purpose-built, bullet-shaped three-wheeler was powered by a 48,000-horsepower solid-fuel rocket engine, assisted by a 12,000-horsepower Sidewinder missile. Adding a sense of occasion to the proceedings was the presence of sound-barrier buster and friend Chuck Yeager.

“It’s never going to be worth more than it is right now.”

Barrett reveals that while prepping for the speed runs, Newman said, “Hey, take care of my watches, will you?” He interprets the statement as Newman’s way of saying, ‘Be careful.’ “Paul would always skirt the issue a little bit by saying something else,” he reflects. “He didn’t want to get mushy about anything.”

Barrett made a total of 18 runs in an attempt to break the sound barrier, but some controversy surrounding a radar speed measuring device failure disqualified a 739.66 mph run from being officially recorded. Barrett says that sonic booms were heard, and that the Air Force performed a 200-page study that indicated a 99.16 percent chance Mach 1 was achieved. He adds that the induction of the rocket car into the Smithsonian’s National Museum of American History collection further cements its legitimacy.

If there’s a single image that sums up the significance of these watches, it would be the snapshot of a shirtless Barrett wearing the two wristwatches on his left arm while adjusting a pair of goggles just ahead of a speed run at the Bonneville Salt Flats.

Also up for grabs will be a Rolex which was gifted to Barrett by then-CEO of Anheuser Busch, August Busch. The 18k gold 1675 GMT-Master is engraved “Stan Barrett – Driver – Budweiser Rocket Car 739.66 MPH December 17 1979.” The 40mm watch is estimated to fetch between $50,000 and $100,000, and wears an 18k gold Rolex Jubilee bracelet, a Rolex presentation box, booklet, polishing cloth and hang tag, and five signed photos of Barrett.

The Time is Now

Barrett says he enjoyed wearing the watches frequently over the years, sometimes favoring the GMT when doing stunt work because of its robustness, but typically bringing both to set when working with Newman.

Why sell three beloved timepieces when they could stay in the family as heirlooms? In an unfortunate testimony to current events, Barrett recalls several stories of friends and acquaintances who have been robbed of their prized jewelry and watch possessions. He says he has allowed his sons to wear both watches, but has concerns over their safety when doing so. “Now that they’re worth so much, I’m afraid somebody might cut his arm off to get that watch.” He adds that proceeds from the sale will go to the Slavic Gospel Association and to the Nell Newman Foundation.

When his son Stanton told him, “Dad, I really hate that you’re selling that watch,” the elder Barrett replied that “It’s never going to be worth more than it is right now.”

The world will find out exactly that worth when the Sotheby’s Important Watches auction commences on December 9 at 10:15 am Eastern.