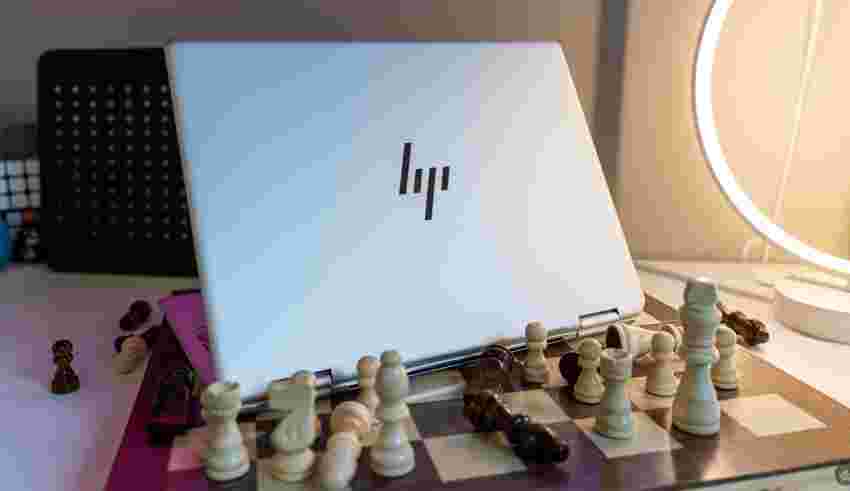 It’s been a while since I last used an HP laptop, and particularly one of HP’s Spectre devices. Back in 2019, I reviewed the Spectre x360 and was generally impressed with it – the laptop offered a stylish design and decent specs and performance with a few issues.

Fast forward to 2023, and I’ve been using the latest Spectre x360 for a few weeks (I started testing it last year, actually, but thanks to a busy holiday season and some well-deserved time off, the review is only coming out now). 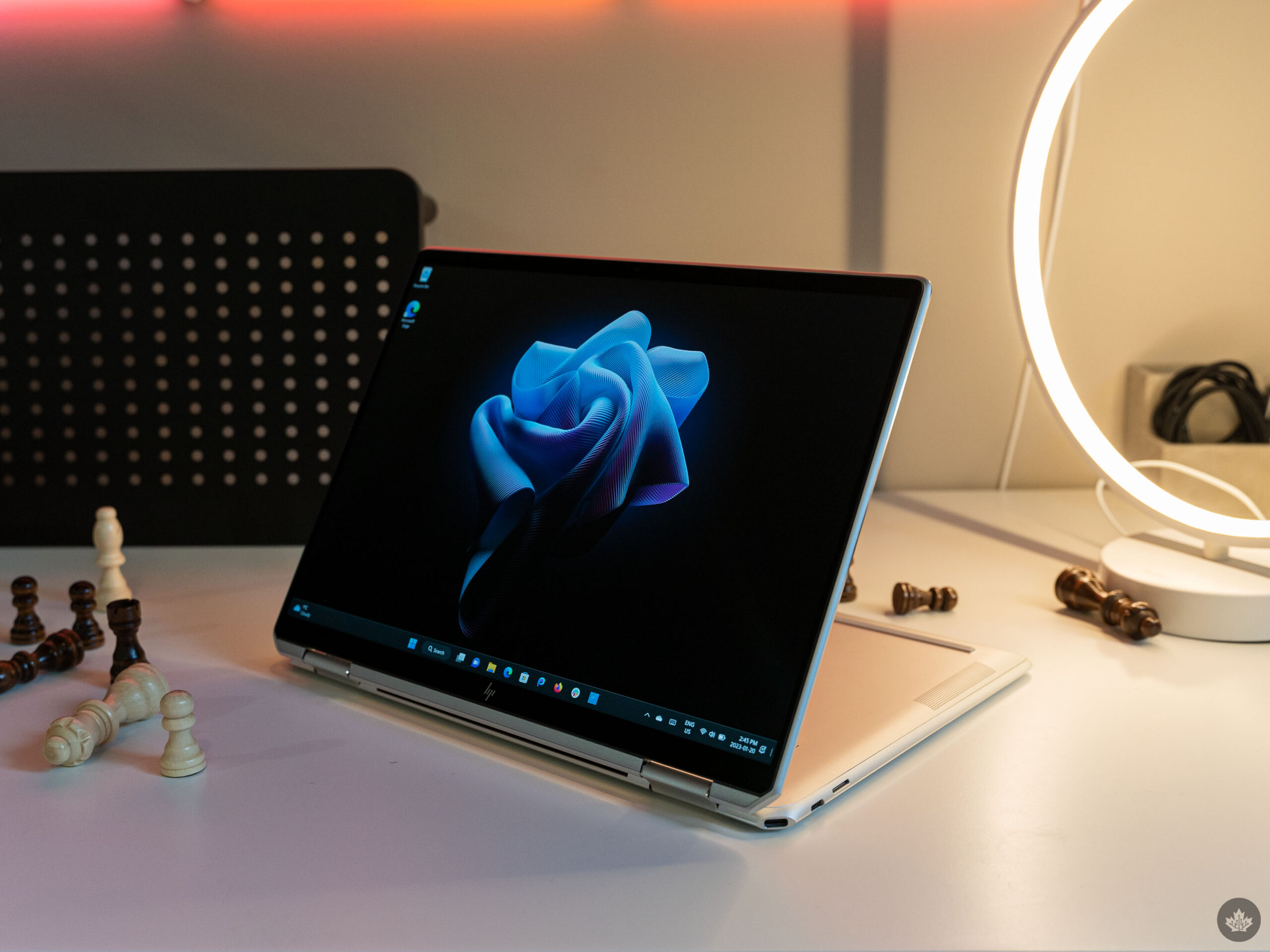 Generally, the new Spectre keeps some of the main stylings of the 2019 variant but swaps out the edgy, chiselled chassis for one with rounded edges. Moreover, the new Spectre only comes in one boring ‘Natural Silver’ colour – I miss the lovely green/gold colours featured on the 2019 model.

But colours and design only mean so much on a laptop, and in the other areas that matter, the Spectre x360 disappointed more than it impressed. I’ll get into it more below, but an assortment of audio and performance issues dampened my experience with the laptop despite the Spectre x360 generally getting everything else right. 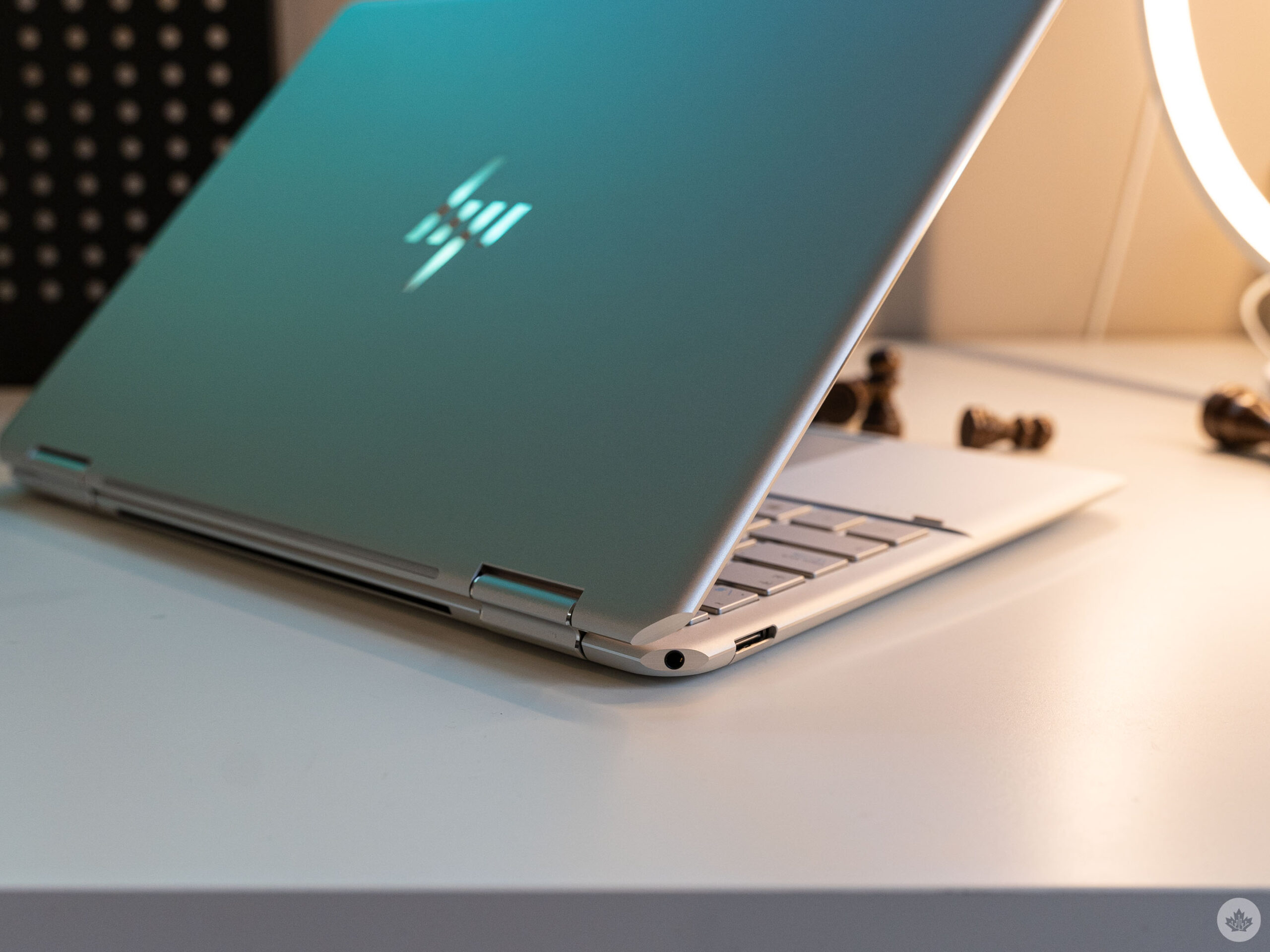 Note: The above specs are for the specific laptop I tested. You can view all configurations for the Spectre x360 14 here.

Initially, I wasn’t a huge fan of the more rounded design of the Spectre x360. However, after using the laptop for a bit, I came to appreciate the rounded edges as they made the laptop more comfortable when in use. For example, the rounded edges didn’t rub my wrists when typing in the same way as squared-off edges do.

Moreover, the rounded edges made for a slightly more old-school feel, reminiscent of the days before every laptop was a samey metal slab.

Of course, not everyone will appreciate the style of the Spectre x360, but I found it unique enough to feel different without being a totally alien device.

I also appreciate that the cut corners returned, although they do feel incongruous with the rest of the laptop’s design. Like with the 2019 model I tested, the cut corners reside on the hinge side of the laptop, and only two of the four corners are cut this way, making the laptop asymmetrical in a way I don’t prefer. That said, the asymmetric design is less offensive on the 2022 Spectre since the non-cut corners match the rounded aesthetic present elsewhere. 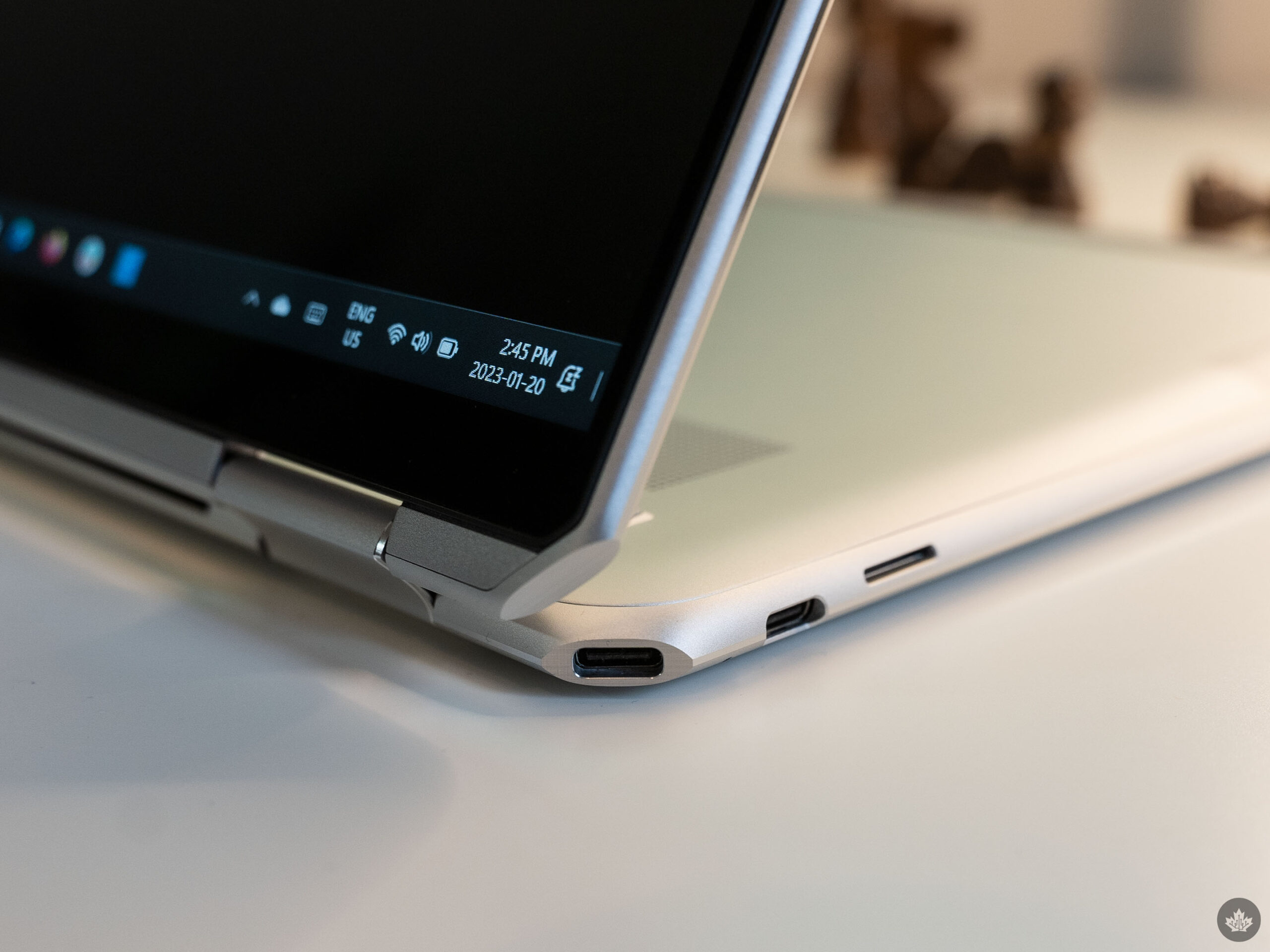 One major difference from 2019 is that the new Spectre x360 sports the headphone/mic jack on the top-left corner instead of the power button, which now resides on the top-right corner of the keyboard. Practically, I prefer not having a power button on the side of the laptop, but I’d also prefer if it was set apart from the keyboard rather than disguised to look like any other key.

The top-right corner of the laptop once again sports a USB-C port (both USB-C ports on the Spectre x360 14 are Thunderbolt 4 as well). The angled port is great for charging since it keeps the cable out of the way of your mouse – it’s a great middle ground between the accessibility of side-mounted ports and the clean look of tucking your cables away with rear-mounted ports.

I do wish the left corner also had a USB-C port since my desk setup would prefer cables on the left side of my laptop, but that’s a niche complaint for me.

The Spectre x360’s display is decent. While not the best display I’ve ever seen, it definitely gets the job done and I have no complaints. The 3:2 aspect ratio is welcome as always, and the 1920×1280 pixel resolution – while not a super high resolution – was still plenty sharp. I’ve written it before, and this won’t be the last time I write it, but I often find 4K displays to be overkill on laptops.

The keyboard and touchpad are also both excellent this time around. I quite liked the keyboard on the 2019 Spectre but had some issues with debris getting underneath the keys. I haven’t had a similar issue with the new Spectre x360, and the keys have remained tactile throughout the review period. I’d place this keyboard on about the same level as what you’d get from Microsoft’s Surface laptops, which is to say, among the best available on Windows PCs.

The touchpad, on the other hand, is a marked improvement over 2019. It’s much bigger but still offers a wonderfully tactile click when pressed. It’s also a very smooth trackpad and I found it handled my inputs well enough that I didn’t hate using it.

On the other hand, the laptop’s speakers were less stellar. Despite sporting Bang & Olufsen branding, the Spectre x360 sounded hollow and tinny when watching videos or listening to music. If you need the speakers in a pinch, they work, but don’t expect the best sound experience.

Struggling with the basics 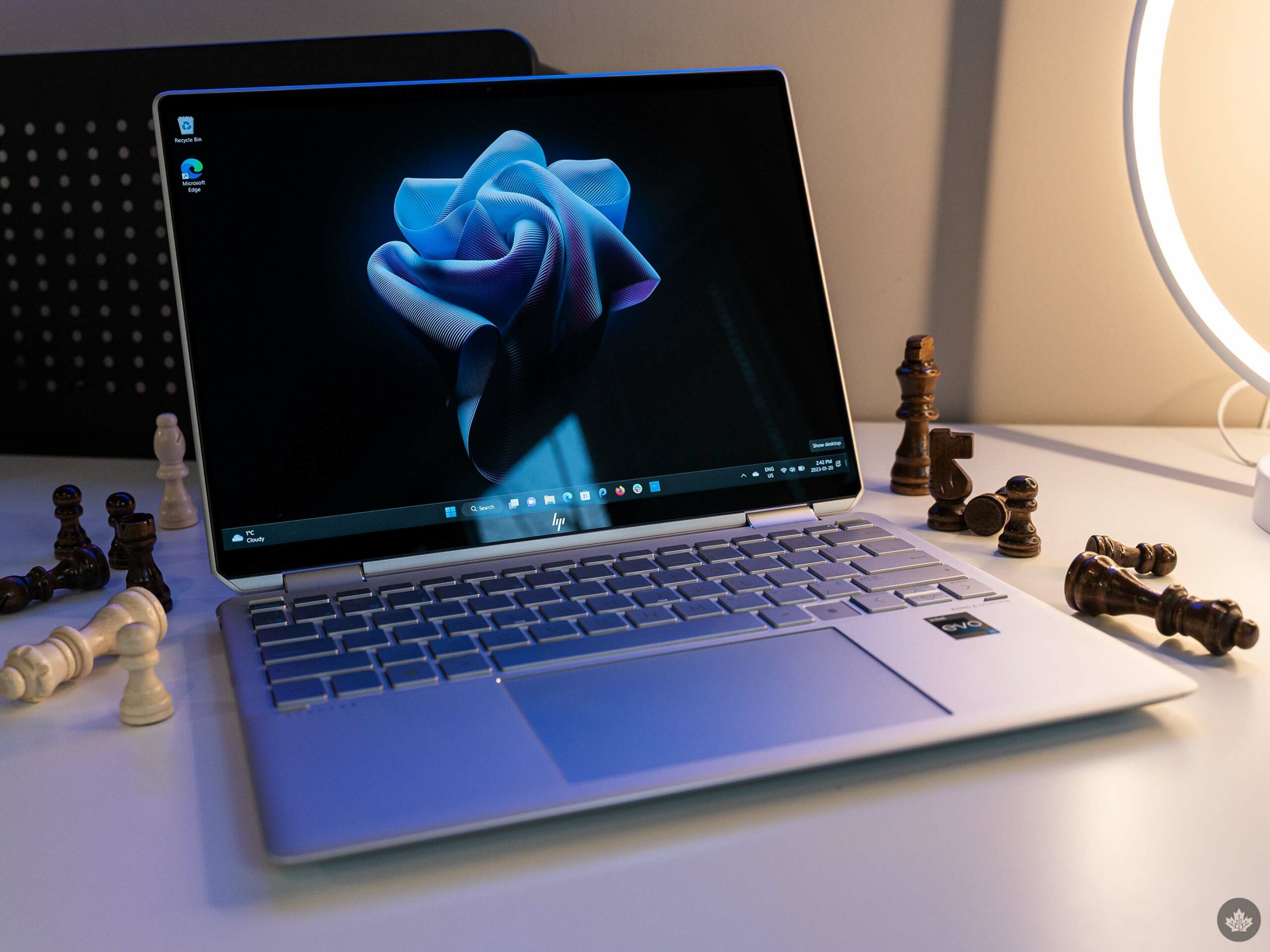 As someone who regularly tries new laptops as part of their job, I’ve tuned my workflow to be almost entirely browser-based so I can swap from device to device with minimal set-up time. Generally, this works out well for me, but I was surprised to find the Spectre x360 didn’t always play nice with web browsers.

I often had performance issues when using the laptop, ranging from minor issues where my web browser would slow down or feel less snappy than usual to more serious crashes or freezes. I usually use Firefox, but I bounced around to some Chromium-based browsers as well during testing and found they only fared slightly better.

It wasn’t just my browser impacted by the weird performance either – OneDrive, which I use to backup photos I take for work, was weirdly slow on the Spectre x360 and seemed to cause File Explorer to hang from time to time. At the same time, some apps – like, much to my surprise, Photoshop – seemed to work fine with just the occasional hiccup.

Looking at the benchmark results, it’s not totally surprising to see where the Spectre x360 landed in both Geekbench and Cinebench tests. Sporting a 12th Gen i5, it lands behind all the laptops sporting 12th Gen i7 chips, which makes sense. It also barely beat out the Surface Pro 8 with an 11th Gen i7. Benchmarks obviously don’t tell the whole story when it comes to performance, but it reinforces my surprise at the odd performance I experience in day-to-day use. 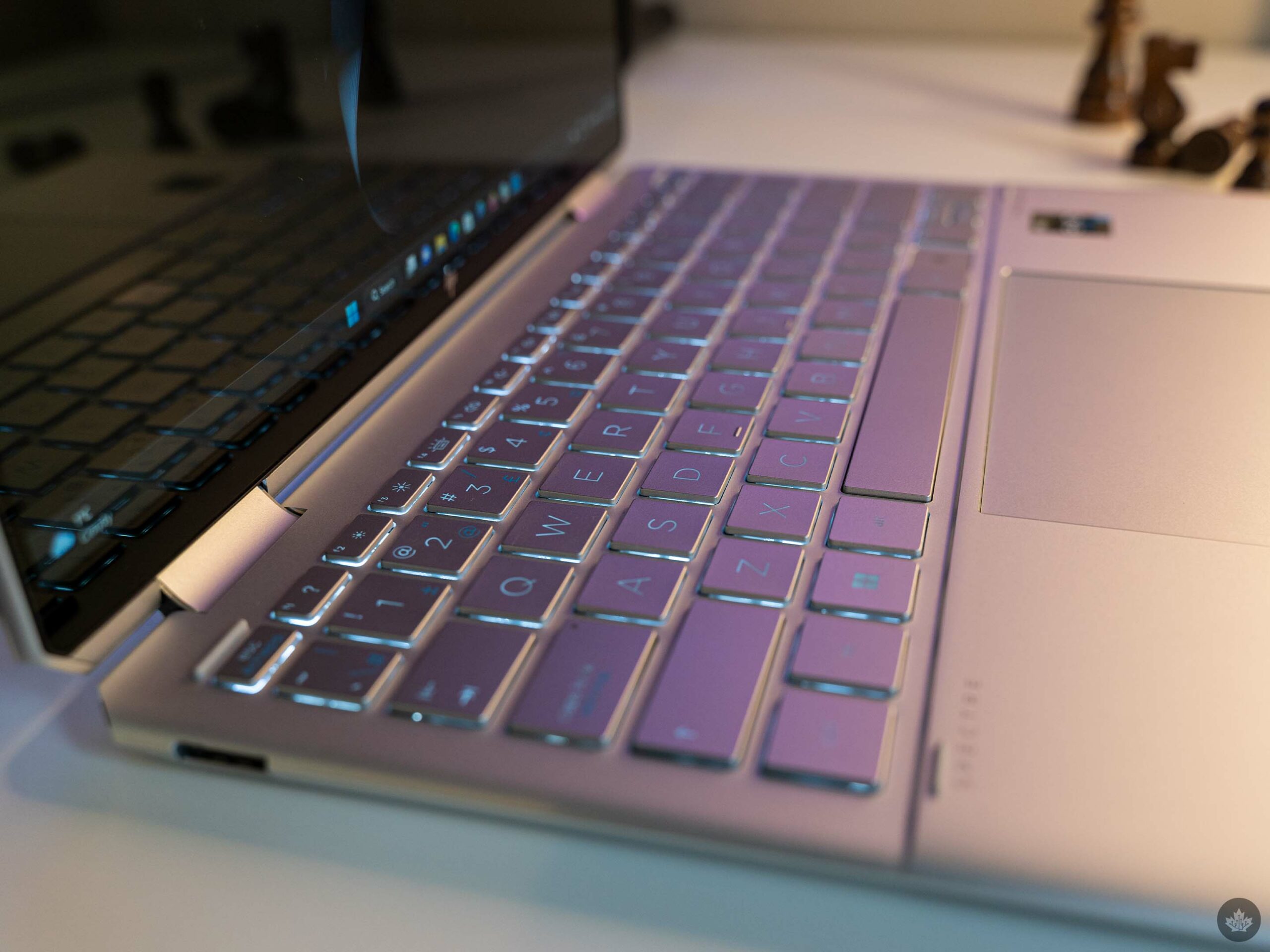 Aside from pure performance issues, I also had several problems with connecting Bluetooth devices. It wasn’t that the Bluetooth didn’t work – I had no problems pairing Bluetooth earbuds, for example, and I often used my trusty Surface Earbuds, which have served me well for years.

However, with the Spectre x360, Bluetooth audio was anything but reliable. Connecting the earbuds sent the whole audio system into disarray. In the weeks I used the Spectre x360, I found myself in countless video meetings where I couldn’t hear what people were saying, or they couldn’t hear me (or both!). There was one bizarre meeting where the volume was locked at an uncomfortably high level and even though Windows showed the volume being turned down when I adjusted it, the actual volume never changed.

I’m still unsure what caused the problems, and whenever I thought I’d fixed them, connecting an audio device would introduce some new problem. 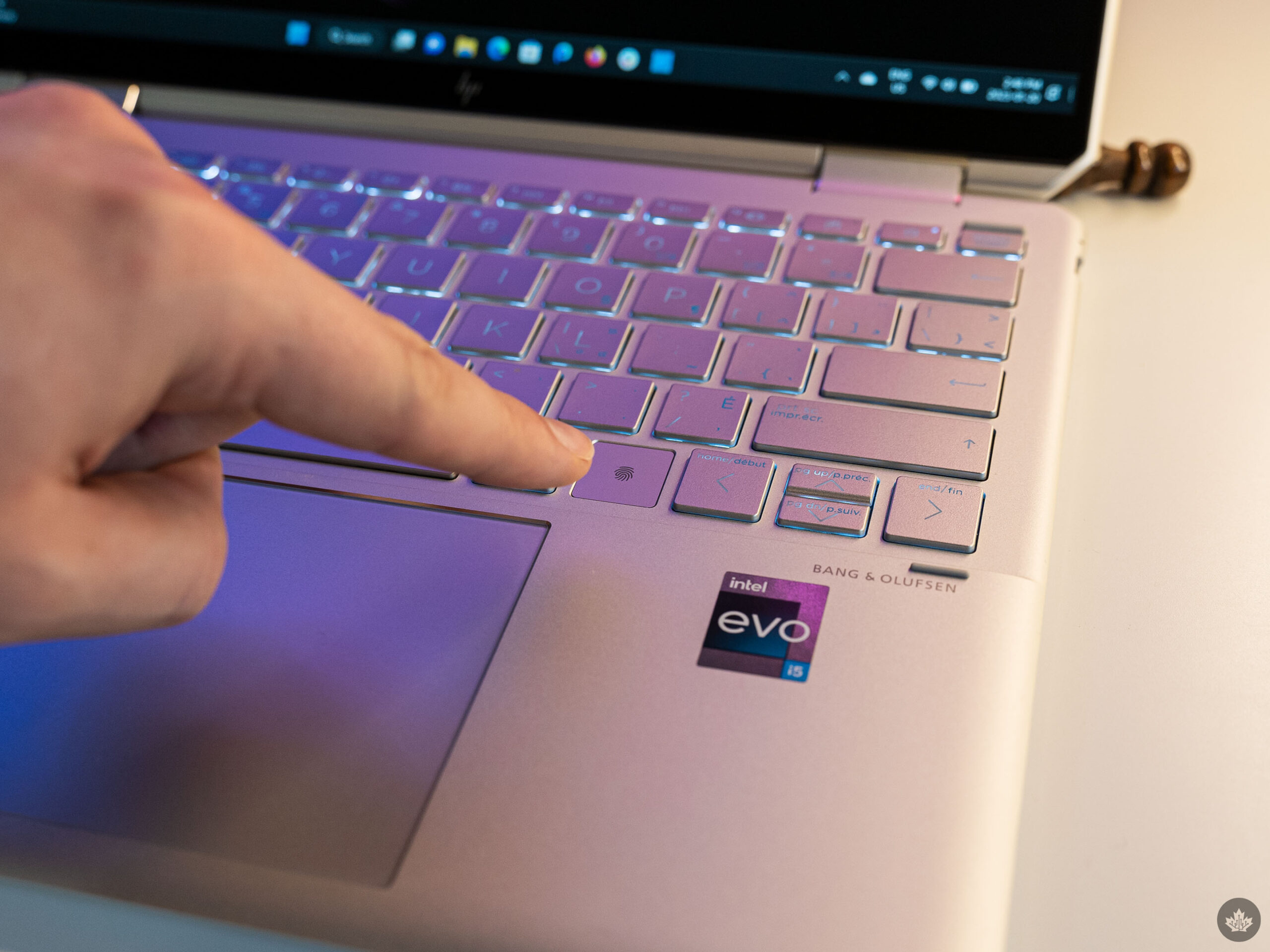 Beyond the audio issues, I was also disappointed by the amount of pre-installed bloat that shipped on the Spectre x360. While admittedly nearly every Windows laptop ships with some level of bloat, what was particularly frustrating about the Spectre x360 was that it felt like the added apps were gumming up the works. For example, things like the HP Omen Gaming Hub were constantly hogging resources even after disabling the app from running at startup.

I’d strongly recommend anyone buying an x360 take the time to purge the bloatware to help boost performance (typically, this is something I’d do with a laptop but with reviews, I’d rather leave the bloat alone to see what, if any, impact it has on the system). 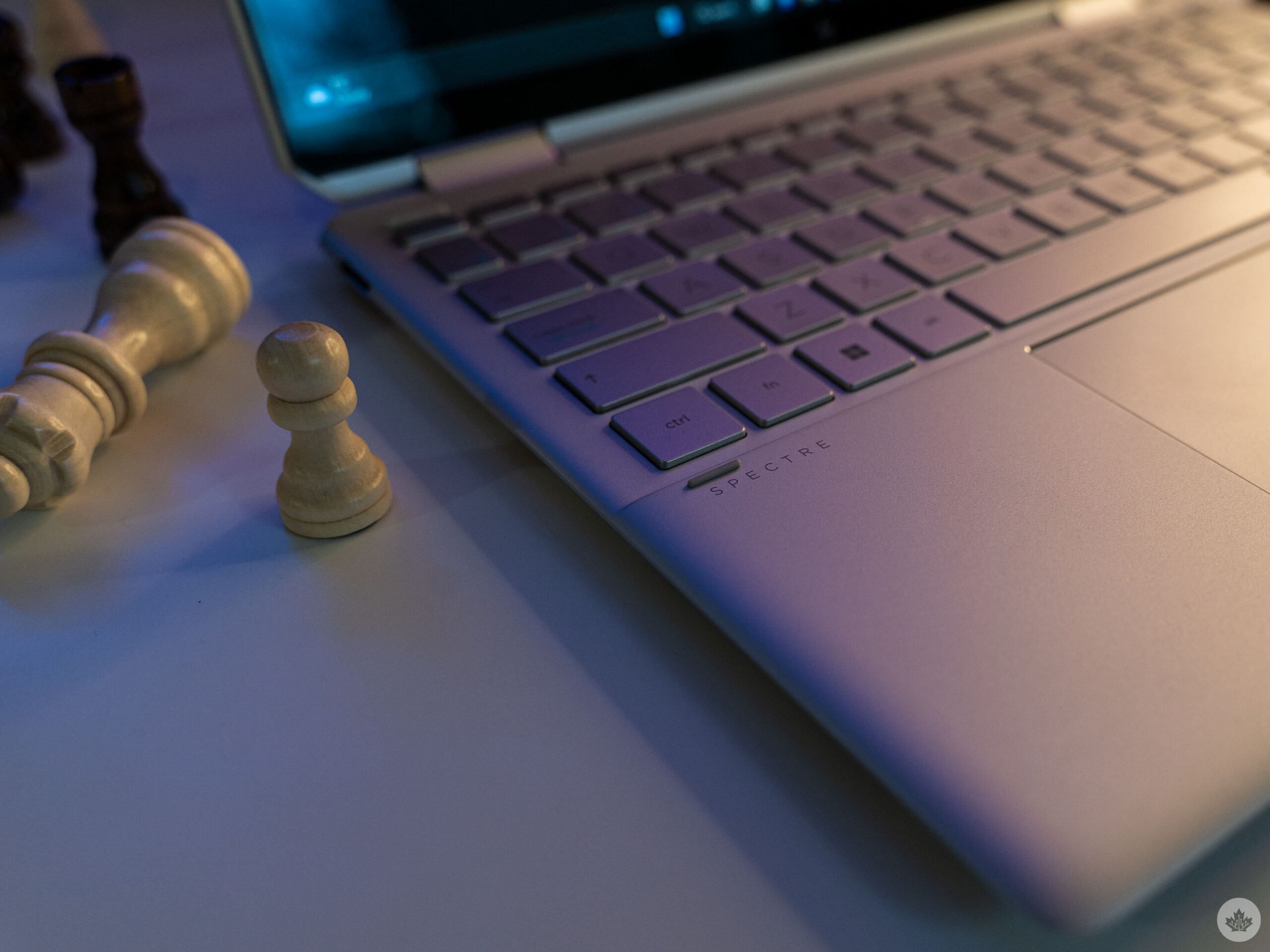 Despite the issues, I generally really like the Spectre x360. It’s got a big trackpad, which makes using it while on the go much easier. Plus, it’s got one of the better laptop keyboards available, which is a big win for people like me that type all day. But when you factor in the price, it becomes a tougher sell.

HP Canada’s website listed three configurations of the Spectre x360 with the following prices (and, at the time of writing, some discounts):

Compared to some other recently reviewed laptops, like the Lenovo Yoga 9i, Microsoft Surface Laptop 5, and the LG Gram (2022), the base i5 Spectre x360 doesn’t seem like a great option. For example, the Yoga 9i I tested all sported a 12th Gen i7 (although not the same one as the x360), but cost around $1,880 when I reviewed it. The LG Gram is a little pricier, though it also boasts a larger display. The Surface Laptop 5 is definitely pricier, but for some, the reliability might be worth the cost.

However, the $1,699.99 sale price is more tempting while it sticks around, and it shouldn’t have the same performance struggles as I experienced with the i5 model. I can’t say whether it’ll dodge the Bluetooth issues as well, but hopefully, those are a one-off problem my review unit had.

I also checked Best Buy to see what they had, but only the larger 16-inch variant was available.