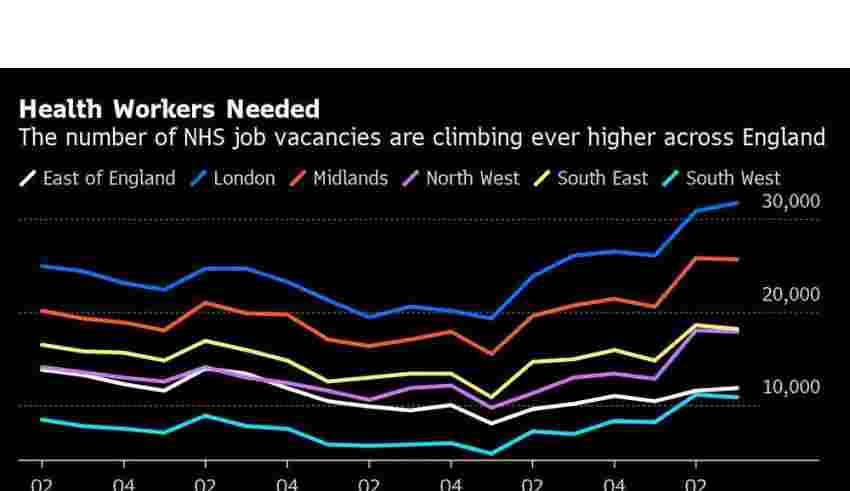 (Bloomberg) — Prime Minister Rishi Sunak is set for talks with the union leaders directing the wave of strikes that have hobbled the UK since the start of the year, as the threat of more widespread action hangs over the country.

The nation will get a mild respite from rail strikes this week after a series of stoppages all but brought the sector to a standstill in the first few days of 2023. Employees on the Elizabeth Line, as well as ambulance workers, still have walkouts scheduled.

Trade-union leaders from various sectors have been invited to talks on Monday in a bid to avert further strikes by NHS, rail and other workers. It comes after the boss of one of Britain’s biggest transport unions last week called for coordinated strikes involving tens of thousands of public sector workers.

Unions want immediate pay improvement, but the government is more willing to talk about public-sector wage settlements for 2023-24. Sunak’s government has signaled it won’t sweeten the package for 2022, which is what has triggered the strikes. The Guardian reported Sunak may be open to a one-off payment to workers.

Some have also been angered by government plans to bring in new legislation enforcing minimum service levels during strikes.

“We want to have a reasonable, honest, two-way conversation about pay,” Sunak said in an interview aired this weekend. “We’re about to start a new pay settlement round for this year.”

The slew of strike action and scenes of disarray in the health service are becoming an increasing political problem for Sunak, swallowing up any chance of a political honeymoon and distracting from his attempts, notably in a speech last week, to assert his leadership.

That’s left him under pressure from members of his own Conservative Party and the wider public to fix the mess. With less than two years until the next election, his Tory party is more than 20 points behind the main opposition Labour Party in the polls.

The industrial action is also dampening economic activity in a country which is already likely to be in recession — it  remains the only G-7 economy with GDP below pre-Covid levels.

Monday’s meeting comes after Sunak hosted a “recovery forum” of health professionals and officials at Downing Street on Saturday to address issues including improving emergency treatment and speeding up social-care discharge.

He left the meeting “with a renewed sense of confidence and optimism that we can get to grips with this problem,” Sunak said on Sunday. “The NHS is undeniably under enormous pressure.”

In the same appearance, Sunak said it’s not guaranteed that inflation will slow this year and stressed the need for continued wage restraint.

Easing inflation “is a function of having a responsible economic policy when it comes to things like pay,” Sunak said in a BBC interview. “It’s not a given that it just happens. You have to continue to be disciplined and make the right, responsible decisions.”

Surging energy costs due to Russia’s war in Ukraine propelled inflation above 11% last year, setting off a cost-of-living crisis. Sunak says curbing price gains is his top priority and the reason he’s been resisting calls to accept large pay demands in the public sector as they could further stoke inflation.

That position has come under increasing strain amid widespread disruption in the UK, most acutely in the NHS where a resurgence of Covid-19, the winter flu and industrial action — including the first major nurses’ strike in history — have forced hospitals across the country to declare critical incidents.

As part of their effort to ease the crisis, the government said Monday it earmarked to £200 million to buy thousands of extra beds in care homes and other settings to help discharge more patients who are fit to leave hospital. An additional £50 million of funding was announced to fund new ambulance hubs and facilities for patients about to be discharged.

Meanwhile, nurses have been pushing for a 19% pay rise and recently urged the government to meet them “halfway” on their demands.