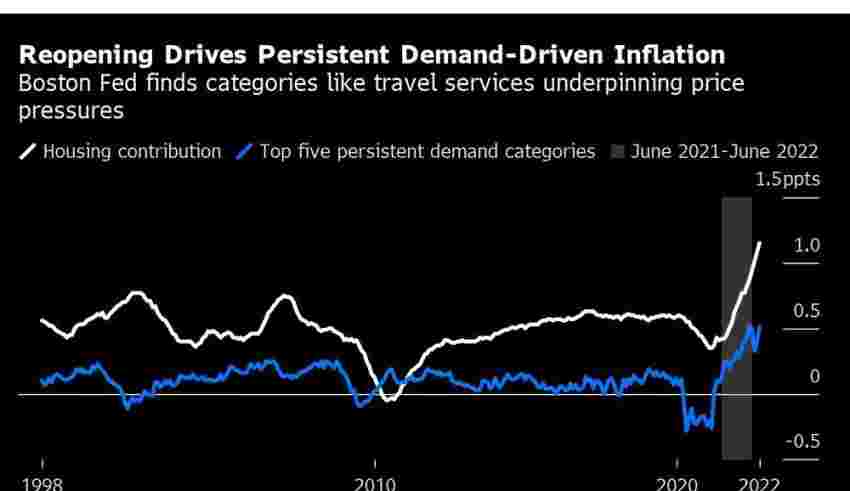 (Bloomberg) — Strong demand for goods and services may be starting to overtake supply constraints — from the pandemic and the war in Ukraine — as the driver of US prices, according to new gauges built by Federal Reserve economists.

On the face of it, that would suggest inflation is more likely to stick around even as the disruptions caused by pandemic and war fade from view, strengthening the case for tighter Fed policy to counter it.

But the new research contains evidence that points in the other direction too, illustrating just how hard it is to disentangle the impacts of supply and demand on prices.

“It is kind of the age-old economic problem,” said Mark Zandi, the chief economist at Moody’s Analytics in West Chester, Pennsylvania. “It really matters in terms of current monetary policy because if you feel that it’s more supply-side driven, as opposed to demand-side, you might be more supportive of the idea that the Fed should be cautious.”

To tease out the different drivers of inflation, the Fed economists focused on the relationship between prices of individual goods and services, and the quantities of those things that consumers bought.

Typically, the demand-driven variety is seen as more persistent than the supply-driven one. But the new research shows that conclusion isn’t actually so clear-cut.

The Fed’s preferred measure of so-called core inflation, which excludes food and energy categories, is expected to ease to 5% when October data comes out on Thursday.

The number stood at 5.1% in September — and that month, for the first time since inflation took off in the summer of 2021, demand-driven price pressures outweighed supply-driven ones in the annual number, according to the San Francisco Fed’s breakdown using the prices-and-quantities approach.

One major caveat: There is still a sizable “ambiguous” category of goods and services that don’t fit neatly into either the supply or demand buckets which accounts for about one-fifth of the total. That means demand still accounts for less than half of overall core inflation in the breakdown.

Another issue: It’s not necessarily the case that demand-driven inflation requires a tougher response from the central bank in the form of higher interest rates. That depends on whether the effects can be expected to fade quickly — an additional element that economists at the Boston Fed have been looking into.

“Persistent demand shocks would require much more ‘leaning against the wind’ than transitory demand shocks,” said Viacheslav Sheremirov, an economist at the Boston Fed who recently published a paper building on the San Francisco research.

Once inflation in a given category of goods or services has been identified as demand-driven or supply-driven, Sheremirov’s study attempted to take an additional step by classifying it as temporary or persistent.

“I actually find a nontrivial persistent demand component, and in comparison with the historical data, it’s not usual,” he said in an interview. “Usually, most of the demand component comes from transitory sources.”

In the San Francisco Fed breakdown, housing plays a big role on the demand-driven side, in part just because of its outsize weight in monthly household budgets. But the Boston Fed research found that it’s not so easy to classify housing as a persistent source of demand-driven inflation.

Instead, it identified other services categories — especially those related to travel, like airfares and hotel accommodations — as the most persistent contributors to the demand-driven inflation bucket.

That’s consistent with a rush to spend savings accumulated during lockdowns as service industries reopened — though by June 2022, where the Boston Fed analysis stopped, the effect was beginning to recede.

Zandi, for his part, is doing a similar prices-and-quantities exercise. His work suggests that the impact of demand pressures peaked during the spring and summer of 2021 — after the passage of the American Rescue Plan and roll-out of vaccines fueled spending as the economy reopened — and that supply shocks are what have propelled inflation to four-decade highs since then.

With those supply-side pressures now also starting to recede, inflation may become more demand-driven once again. But that will coincide with a much lower headline inflation rate: Forecasters see it dropping below 3% by the end of next year.