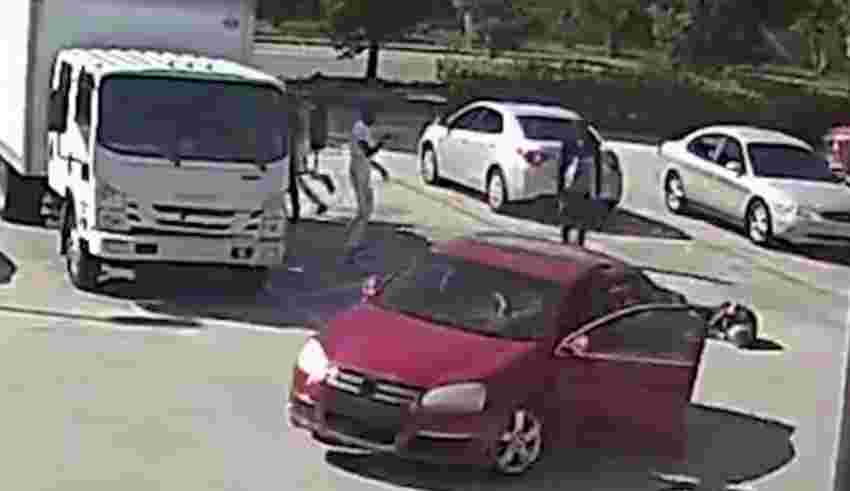 LAUDERDALE LAKES, FL – Detectives with the Broward Sheriff’s Office Robbery Unit are investigating a carjacking that took place on Saturday, November 5, in Lauderdale Lakes that left an 82-year-old man injured on the pavement of a parking lot.

Broward Sheriff’s detectives released surveillance video that shows the crime. In the video, five males are seen approaching the victim as he pulls into a parking space at the RaceTrac located at 3290 W. Oakland Park Boulevard. According to the victim, one of the males told him one of his taillights on his red Volkswagen Jetta was broken. The victim exited his vehicle to inspect his taillight. That is when one of the subjects entered the driver’s side of the vehicle, which was still running. The victim attempted to pull the subject out of the vehicle but was pushed to the ground.

Investigators say the victim suffered minor injuries. The vehicle was recovered in the City of Fort Lauderdale, but the carjackers are still on the loose. The victim said one of the carjackers had a distinguishable limp in one of his legs.

Broward Sheriff’s Detectives are asking anyone with information on this incident or the identities of the subjects to contact Robbery Detective Armando Enrique at 954-321-4233 or submit a tip through the SaferWatch App. If you wish to remain anonymous, please contact Broward Crime Stoppers at 954-493-TIPS (8477), online at browardcrimestoppers.org, or dial **TIPS (8477) from any cellphone in the United States.