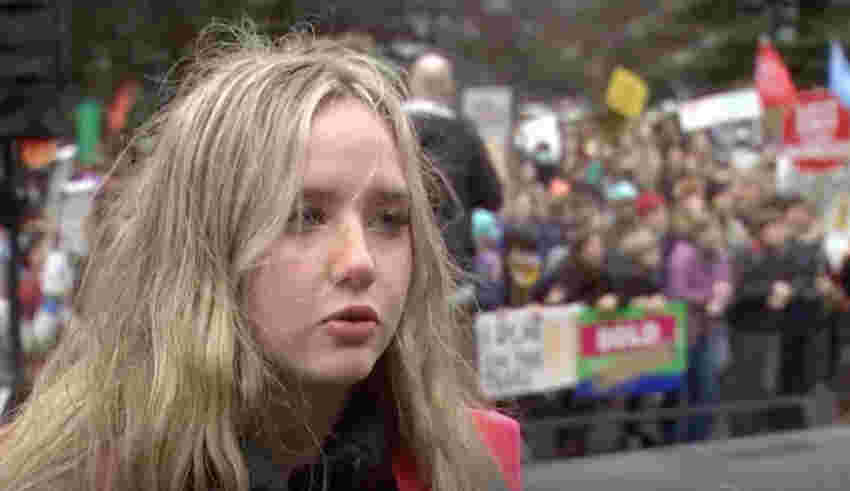 NEW ZEALAND – Izzy Cook, one of the main leaders for School Strike for Climate in Wellington, New Zealand, recently made headlines for a phone interview she did with local radio host Heather du Plessis-Allan, leaving the interviewer in hysterics during a clueless exchange where the 16 year-old proposed that people should only be allowed to fly for “approved” events due to the damage airplanes do to the environment, only be called out after admitting having just flown on vacation herself.

During the interview, du Plessis-Allan noted Cook’s stance on flying, asking her “So we would have to apply to have approved events to be able to fly for?”

“Well, that’s one thing that you could look at doing,” Cook replied.

“Am I allowed to go to Fiji?” du Plessis-Allan asked.

“When was the last time you were on an airplane?” du Plessis-Allan asked, to which cook replied “a few months ago.”

“Where did you go?” the interviewer inquired, obviously setting the teenager up for a fall.

“Fiji,” the young climate advocate sheepishly admitted, electing uncontrolled laughter from du Plessis-Allan, who had combed through Cook’s Instagram page prior to the interview and already knew the answer.

“Of course I care about the climate,” Cook responded, to which du Plessis-Allan – still rolling with laughter – interjected with “Not enough! You went to Fiji! Izzy, come on! Are you serious? Are you serious Izzy?”

“It is pretty ironic,” Cook admitted. “To be honest, it’s not really a trip I wanted to go on, I can’t really get out of it.”

When the interviewer asked why she went on the trip, Cook replied that her parents made her go.

“Izzy, are you embarrassed that your parents did that to the planet and then forced you to do it as well?” du Plessis-Allan inquired.

“Of course I’m not embarrassed,” Cook replied, and then admitted “not really” when asked if she had a terrible time in the lush South Pacific paradise.

Cook’s mother Rose later published an opinion piece for website The Spinoff, expressing her outrage over her daughter’s perceived treatment at the hands of du Plessis-Allan, despite the fact that the interviewer merely called out the teen for not abiding by her own climate claims.

“On Friday evening, I listened in horror as my 16 year old daughter had a phone conversation with someone who appeared to be bullying her, laughing at her, and talking over her,” she said. “She has had some experience with dealing with the media, but she wasn’t prepared for Heather du Plessis-Allan. Commentators like du Plessis-Allan don’t give a shit about climate change.”

“Heather du Plessis-Allan became a mother this year,” Rose Cook added. “I hope that no-one ever speaks to her child the way she did to mine.”