Telus and its flanker brand Koodo launched a new ‘Stream+’ subscription that allows customers to add a $25/mo bundle with Netflix, Apple TV+, and Discovery+ to their plan.

Telus’ Stream+ service differs slightly from Koodo’s version, as it also includes Telus TV+ and the Vancouver-based national carrier offers a $5/mo discount to customers who get Stream+ when activating or renewing one of its 5G+ or Canada/U.S. Unlimited plans. 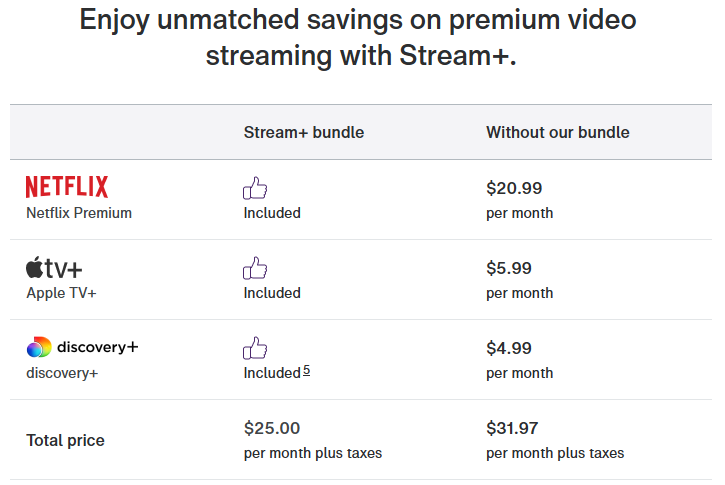 Moreover, Telus says that customers who sign up for Stream+ can keep their existing accounts for these services, so if you already have Netflix (for example), you can port your account to Stream+ instead of making a new one. That means you’ll keep your watch history and take advantage of savings.

However, if you’re buying an Apple device, the Stream+ bundle may not be the best deal, at least at first. Apple offers a three-month free trial of Apple TV+ to customers who buy a new Apple device, so you may want to make use of that before getting Stream+.

Finally, it’s worth noting that Stream+ is likely an effort to compete with Rogers and Bell, both of which bundle streaming services with their mobile plans. Rogers offers six months free Disney+ on select wireless plans, while Bell offers 24 months free of its own Crave streaming service (although it’s only the ‘Mobile‘ tier).

You can learn more about Stream+ with Telus here (or here with Koodo).