Home Automotive The Best Porsche Colors of All Time 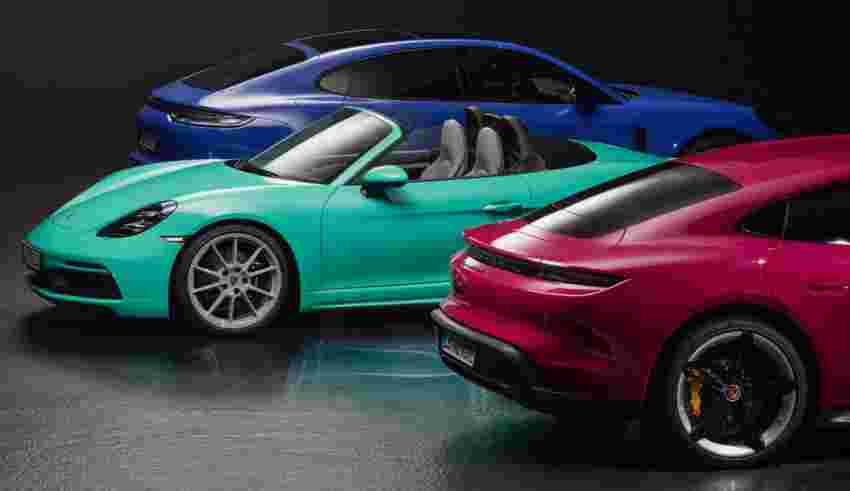 Porsche is famous for its luxury vehicles. Every model features state-of-the-art technology that creates an unparalleled smooth ride when cruising down the road. Porsche is also well-known for creating beautiful-looking cars that immediately let onlookers know what type of vehicle it is. The Porsche aesthetics are timeless, which brings us to the main topic of this blog: the best Porsche colors of all time.

In this article, we’re going to take a look at the top 20 Porsche color options of all time. You can use this post as a guide when deciding the best Porsche paint colors for resale or if you’re looking for some of the more popular Porsche color paint names.

View The Best Paint To Sample Porsche You Can Buy Today

Best Porsche Colors of All Time

The following are some of the most popular Porsche colors. Of course, this Porsche color list isn’t exhaustive but these colors are consistently ranked among Porsche fans’ top color choices.

Here are our top 20 Porsche color codes for quick reference:

British Racing Green has a long and storied history dating back to the early 1900s. Porsche puts their own spin on it where you can find it on models such as the 911 or the 997.

Carrera White appears on the Porsche 911, Boxster, Cayman, and Panamera. It’s a white base and gray undertones to give it a marble-like feel and finish.

Chalk appears on multiple Porsche models including the 911, the 718 Boxster, the 718 Cayman, the Panamera, the Macan, the Cayenne, and the Taycan. It’s also sometimes referred to as Crayon.

GT Silver Metallic appeared on Porsche models such as the 911, the Boxster, the Cayman, the 718 Boxster, the 718 Cayman, and the Panamera. It’s a light metallic gray color that pairs perfectly with black and red accents.

Guards Red appears primarily on the Porsche 911, but it’s also available on other models such as the Boxster, the Cayenne, and the Cayman. It’s one of the most classic reds in the industry.

Gulf Orange appeared on the Porsche 911 and the Cayman. This iconic color is bright, flashy, and looks beautiful with black accents.

Irish Green is a vintage color that mostly appeared on the Porsche 911 from 1964-1977. It also made an appearance on the Porsche 356 and 914. It’s a non-metallic green that’s gorgeous and iconic.

Lava Orange appeared on the Porsche 911, 718 Boxster, and 718 Cayman. It’s a classic ruby orange color that’s complemented by black and silver accents to give it a luxurious feel and style.

Lizard Green is a light green color that appears primarily on the Porsche 911. It pairs beautifully with black accents and stands out when cruising down city streets.

Mexico Blue is a vintage light blue color that appeared on the Porsche 911 in 1974 & 1975. It’s complemented nicely by black and silver accents and is regarded by many Porsche fans as the best of all time.

Miami Blue is a bright sky blue color that appears on the Porsche 911, the 718 Boxster, the 718 Cayman, and the Macan. This bold color looks fantastic when paired with black and silver accents.

Oak Green is a metallic dark green that appears on all Porsche models and dates back to 1976. It’s a sleek color that pairs nicely with black accents.

Python Green is a bright green color that appears on the Porsche 911 and Cayman. With its glossy finish, it pairs extremely well with black, silver, or white accents to make the color pop.

Shark Blue is one of the new colors featured on the Porsche 911, 718 Boxster, and 718 Cayman. It’s a rich blue color that’s aggressive and speedy. It’s well complemented by black accents.

Signal Green is a light green that’s primarily found on the Porsche 911 but it’s also appeared on other models such as the 924, the 968, and the Cayman. It’s one of the rarest colors you’ll find.

Signal Orange is a vintage rich orange found on the classic 911 and 914 from 1970-1975/4. With a splash of yellow to give it its unique pumpkin-like color, it pairs well with black and silver accents.

Speed Yellow is a deep yellow that’s appeared on the Porsche 911, the Boxster, and the Cayman. It can also be found on the Porsche 968, but that’s very rare. It looks great when paired with black accents.

That ends our list of the best PTS colors. Of course, there are plenty of Porsche paint color names that didn’t make it, but we feel each of these uniquely captures what makes a Porsche feel special just by looking at it.

View All Paint To Sample Colors