Home Sports The Heavyweight Dual That Lived Up To Expectations 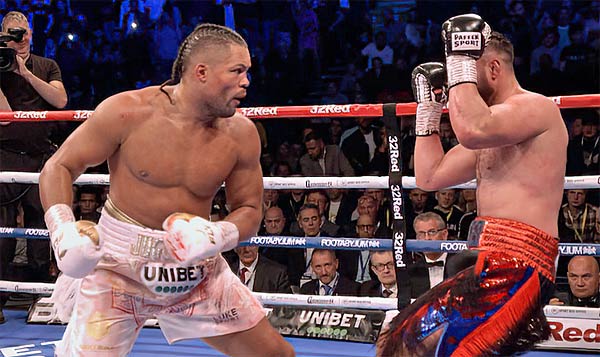 On Saturday boxing fans were treated to a great heavyweight match-up where Joe Joyce produced the heavyweight knockout of the year in round 11 against Joseph Parker.

An opening couple of rounds were as expected as we saw the 271 lbs Joe ‘the juggernaut’ Joyce walking the 255 lbs New Zealander down and establishing his jab from the outset.

Parker responded with some good shots that didn’t seem to shake the former British champion and it was nip and tuck until just before mid-way in the contest where Joyce’s power became increasingly apparent as former world champion Parker seemingly felt it and looked as though he was tiring quickly from the astute bodywork and overhand shots landed by the Brit.

A lot of the contest was taken to the corner from Parker due to the sheer size of Joyce and him being able to cut the ring off so quickly. After a cut to the right eye of Parker in the 7th round from a big left hook, it turned it into a gruelling contest for him onwards.

Joyce gained control going into the championship rounds continuing the relentless work to hound his opponent down and able to execute clean shots to the head and body. Yet Parker wasn’t done, he was still in the contest searching for one big shot that never came, nothing he threw at Joyce fazed him.

Another relentless start going into round 11 Joyce landed several punches at will before a clinch momentarily, as soon as referee Steve Gray broke the clinch and allowed them to box again the Juggernaut landed a perfect straight left which stumbled Parker back and he was counted out after being unsteady as he rose to his feet.

A huge statement from Joe Joyce and he is now WBO interim champion, which means he is mandatory to unified world champion Oleksandr Usyk.

They have boxed each other before at the WBS tournament in the amateurs where the Ukrainian got the shut-out victory over 5 rounds at York Hall in 2013. But styles make fights and now they are both at their peak in their professional careers and both still unbeaten it is the perfect time to make the fight. The elusiveness of Usyk against the relentlessness and size of Joyce will be one to savour. Will Usyk be too quick for Joyce or would Joyce’s size, power and engine be too much for the P4P number 1?

In the co-main event, Amanda Serrano unified another title in the featherweight division against Sarah Mahfoud. Boxing her way to a comfortable victory winning 97-93 twice and 99-92 on all three scorecards. After a good week in Manchester where she’s been doing the media rounds for her UK fanbase and eating at Nandos’ with fellow competitor Raven Chapman with hopes that one day they will meet in the ring but for now boxing supporters will now be hoping for the Katie Taylor rematch to be made.

Nathan Heaney remained unbeaten after an extremely disappointing ending to the contest with Jack Flatley after the doctor stopped the fight due to a cut above Heaney’s right eye caused by Flatley leading in with his head which was deemed accidental. At this point, they went to the scorecards which read out 50-45 and 49-46 twice to the man from Stoke on Trent.

Anthony Cacace won a split decision to secure the IBO world super featherweight title against Marco Magnesi in a fight where the rounds were close but Belfast’s Cacace got the decision on the cards which read 116-112, 117-111 for Cacace and 116-112 for Magnesi over 12 rounds.

Ekow Essuman retained his British and commonwealth welterweight titles with a unanimous decision win against Samuel Antwi over 12 rounds with the scorecards reading 112-117 113-116 114-115 all in favour of Essuman.

Raven Chapman got 8 rounds in the bank against former world champion Jorgelina Guanini on her way to a comfortable unanimous decision victory with the scorecards reading 79-73 78-74 77-75.

Manchester’s British middleweight champion Mark Heffron wasn’t messing around as he followed up on his emphatic round 5 victory against Lennox Clarke in July. Stopping Argentina’s Martin Ezequiel Bulacio in the first round and now will be targeting a big fight next as he hopes to be boxing for European honours.

James Heneghan stopped Rod Douglas Jnr in the fifth round a scheduled six.

Amar Akbar got a points win over four rounds against Karlo Wallace winning 39-37.