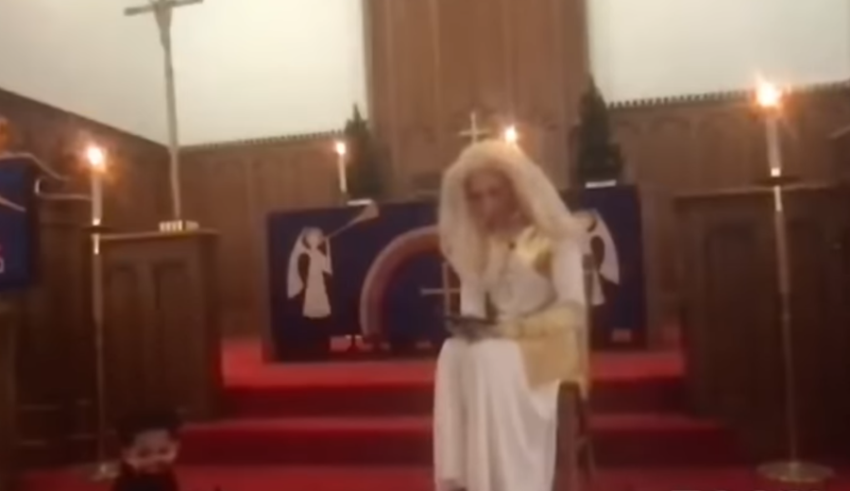 PORTSMOUTH, OH – Since drag queens and transgenderism have been mainstreamed, is it any surprise that there would be churches featuring adult males dressed in outlandish costumes with caked on makeup in worship services? I must admit that it shocked me – disgusted me – saddened me. Debauchery hurled into the face of a Holy God. Desecration in front of innocent children shows that safe places are no longer safe. Depravity in the pews as parents and other adults applaud. Being proud to promote wantonness, these wicked warriors reek of sin’s stench.

Storytime event is scheduled to be held at the First Unitarian Universalist Church of Columbus and is described as “a new family-friendly, LGBTQ+ holiday tradition in Central Ohio.” Ohio performers Mikayla Denise, Bianca Debonair and Ava Aurora Foxx will be reading children’s stories and performing holiday-themed numbers at the event. The event is hosted by the Red Oak Community School, a K-5 school.

“Hold the Line” group shared a video about drag queens in church, warning: “The stakes have never been higher. The church must WAKE UP! #HoldTheLine”

The Park Church in Elmira, New York, celebrated Pride Month by hosting drag queens at its Sunday worship service called “Worship is a Drag,” according to WENY News.

“It’s Sunday morning at a progressive church. The pastor introduces himself, states his preferred pronouns, welcomes the congregants, and then announces the arrival of the guest preacher—the drag queen performing under the name of “Ms. Penny Cost.” It is explained that Isaac Simmons (the man in drag) is a first-year seminary student and candidate for ordination in the United Methodist Church. Simmons will explain why he “gets dolled up” during the children’s sermon, before delivering a message to the whole congregation denouncing capitalism.”

St. Luke’s Lutheran Church of Logan Square in Chicago held a “Drag Queen Prayer Hour,” where a newly ordained pastor in a dress and wig led a service for children, according to a 2019 article at the Ruth Institute. “Anyone leading a prayer service should not be calling attention to himself. He should be calling attention to God. This man in a dress, in front of an altar, talking to small children about his feelings and how beautiful he is, is in every way, calling attention to himself. He is diverting attention from God and God’s truth…This group of people that calls themselves a Christian congregation, in a building they call a church, has made a mockery of God, His church and His people.”

Watch the adult male drag queen at St. Luke’s Lutheran Church explain himself to children on a YouTube podcast as the Christian host exclaims his shock.

“But where sin increased, grace increased all the more.” (Romans 5:20, NIV)

Hark, Christians are stand up and speaking out for the protection of children from the indoctrination, sexualization and grooming by drag queens in public venues. Biology is not bigotry and Freedom of Speech is in the U.S. Constitution.

The Washington Times notes a solution to the problem. “On a recent afternoon, two evangelical pastors read children’s books in public libraries, events they called “Pastor’s Story Hour” in contrast to the burgeoning number of “Drag Queen Story Hour” readings in libraries and public schools.”

The article continues, “The Story Hours in Batavia, Ohio, near Cincinnati, and Cottonwood, Arizona, about 105 miles north of Phoenix, drew as many as 35 children and parents but no protesters, the pastors involved said. The Rev. Michael Foster, pastor of East River Church in Batavia, said “men in lingerie, reading books to little kids and twerking things is super disturbing and twisted.”’

What does it mean when we say that Jesus is the reason for the season? Christmas is the celebration of his birth. It’s Jesus’ birthday. It’s so sweet when parents bake and decorate a cake for Jesus over the holiday season as a way keep the focus on the greatest birth in the history of humanity.

Moreover, the purpose of a church service is to praise and worship Jesus – not drag queens and transgender ideology. Read the Letters to the believers in the seven churches in the New Testament of the Bible.

Me to Father God: I am so deeply sorry that innocent children are being indoctrinated by demonic forces in places that are meant to focus on your gift of salvation. And I pray that no weapon formed against the children shall prosper. Please help us to know how to pray against the darkness infiltrating churches. Please help us to pray that the delusion in the minds, hearts, and souls of the pastors, congregation, and drag queens will be lifted by the light of Jesus. Amen.

“For we wrestle not against flesh and blood, but against principalities, against powers, against the rulers of the darkness of this world, against spiritual wickedness in high places.” (Ephesians 6:12, KJV)

My sound system of choice