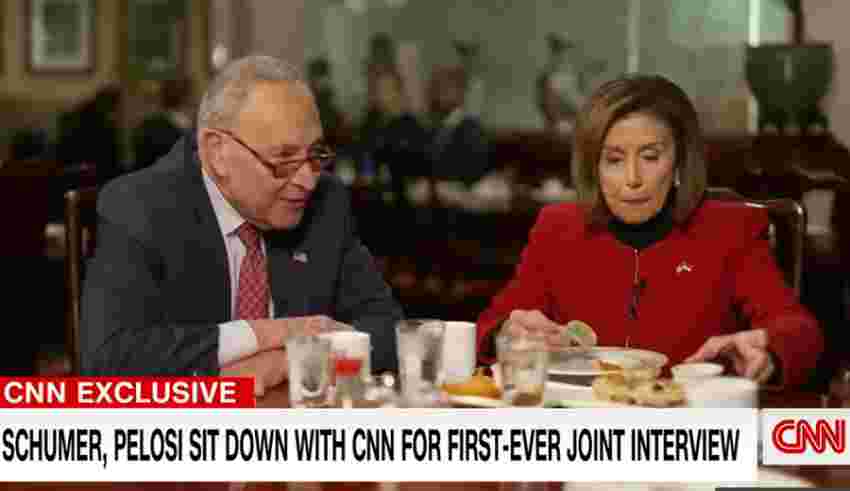 PORTSMOUTH, OH –  Snarfburgers, Senate Majority Leader Chuck Schumer and outgoing House Speaker Nancy Pelosi sneered and mocked President Donald Trump as they gobbled and guzzled during dinner, alongside of CNN’s Jamie Gangel. The trio of obnoxious oldsters reminded me of the Winter Warlock, the Grinch, and Scrooge.

“In an exclusive interview with CNN’s Jamie Gangel, outgoing House Speaker Nancy Pelosi and Senate Majority Leader Chuck Schumer come together in their first-ever joint sit-down interview over lunch at Hunan Dynasty, a Chinese restaurant where the two have shared meals for years.”

Yes, the two turncoats dined on the taxpayer’s dime while colluding on how to steer the country into a Socialist-Marxist regime over the decades. They fed their faces and their bank accounts.

Warning: Viewing this interview before, during, or after lunch may cause gaging, barfing or severe diarrhea.

“I want to talk about how the two of you navigated working with former President Trump,” Geeky Gangel said.

“We had a good time,” answered Crabby Chuckie with an eerie, almost evil-like snickering chortle.

Naughty Nancy and Schumer recalled the government shutdown and their glee when Trump accepted responsibility.

“We sort of set him up, instinctively. We didn’t plan this,” Schumer said.

“She set him up so I could go in for the kill,” Schumer added.

With inflation soaring, ordinary citizens do not want to watch wealthy autocrats chowing down on expensive meals (shrimp dumplings, hot-and-sour soup, Peking duck) while lashing and bashing the 45th President of the USA.

The quadruple cringe part occurred when Gangel asked whether Creepy Joe should run against Trump.

Pelosi quipped, “I don’t think we should talk about him while we’re eating.”

What? Nutty Nancy cannot NOT talk about Trump. Why didn’t she yak about her latest guest appearance on RuPaul’s TV drag show?

My burning question: Should Nancy and Chuck be nominated for an Oscar for their planned performance during the Jan. 6, setup?

The two sickening Scallywags praised the greatness of Beelzebub Biden’s accomplishments. Argh. I am not gobsmacked in the least by their forked tongues. That’s what petty politicians do.

The clip ended with more slams against Trump. Nancy called for a family intervention. Really? I’m thinking about the recent hammer and underwear debacle — an intervention for Paul and Nancy’s relationship is needed.

It’s so interesting how they cannot stop talking about Trump. Bizarre. Why waste time chatting about a person that you perceive to be your enemy? It’s an odd obsession.

And just how did this duo of duplicity get elected and stay in power? Hmmm. I’m sensing a deal with the Devil. And the red guy with a pitchfork got the short end of the stick.