Home Business The Worst Fears for Global Growth May Be Subsiding 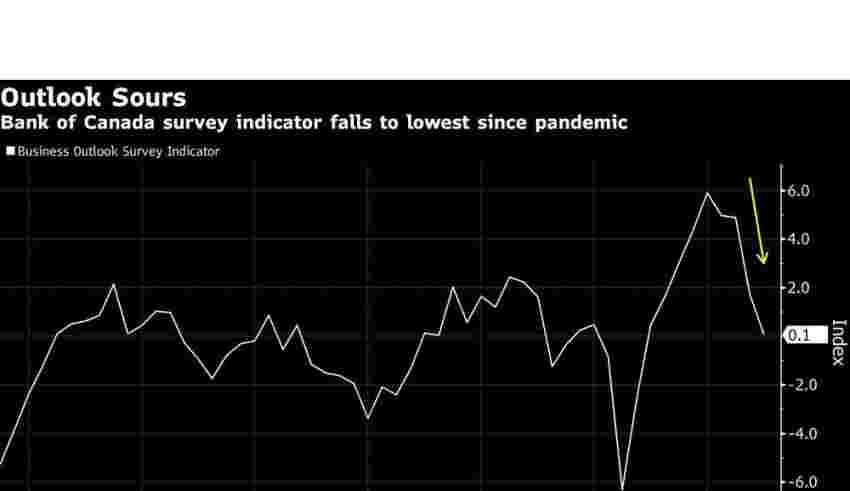 (Bloomberg) — Grounds for more hope that the global economy can avoid a major slump may emerge in the coming week in business surveys showing gradual improvement across much of the advanced world.

Purchasing manager indexes for both the US and the euro zone are anticipated by economists to tick higher. While several gauges will still suggest contraction, the upward direction of travel could add to a growing narrative that a soft landing is achievable.

At the same time, the full effects of concerted policy tightening by central banks have yet to be felt.

Bolstering such prospects are China’s reopening after pandemic lockdowns, evidence of slowing inflation, and the assured views of some senior European officials that their economies won’t suffer recessions. The International Monetary Fund may even soon raise its outlook for the year, its chief hinted on Friday.

“We have, demonstrably, strength of labor markets translating into consumers spending and keeping the economy up,” Kristalina Georgieva said at the World Economic Forum in Davos, Switzerland. “With the reopening of China, we expect growth this year to again exceed the global average.”

How the US fares will also be crucial, however, and the first estimate of fourth-quarter gross domestic product there, due on Thursday, may prove instructive. The economy is seen expanding at a 2.7% annualized rate in the final three months of 2022 after a 3.2% pace in the third quarter.

While such a print suggests solid growth, recent data — including retail sales, home construction and industrial production — showed momentum starting to peter out in late 2022.

Economists surveyed by Bloomberg see GDP in the US declining over consecutive quarters in the middle of this year as steep interest-rate hikes from the Federal Reserve take a bigger bite out of demand.

While Asian momentum could provide a fillip to that outlook, the IMF chief suggested there’s a risk its contribution to the world economy might yet go awry.

“What if the good news of China growing faster translates into oil and gas prices jumping up, putting pressure on inflation?” she said.

“Fourth-quarter GDP to a large extent will be boosted by robust consumer spending on services, even as they pulled back on goods. Households continued to tap into excess savings brought on by stimulus and to benefit from solid wage gains. Tighter monetary policy means 2023 will see significantly weaker demand.”

Elsewhere, multiple rate decisions may include a potential final Bank of Canada hike for the cycle, and a 12th consecutive increase in Colombia. Australia and New Zealand may report slowing consumer-price gains, while euro-zone policy makers have a final chance to speak out before their own meeting the following week.

Click here for what happened in the past week and below is our wrap of what’s coming up in the global economy.

Aside from the PMI and GDP reports in the US, the government is projected to report on Friday that inflation-adjusted personal spending on goods and services fell in December for the first time in a year. The data are also expected to show inflation cooled on an annual basis, while remaining elevated.

Fed officials, who are observing a blackout period ahead of their Jan. 31-Feb. 1 policy meeting, will take into account indications of a slowing economy and moderating inflation.

Other reports are expected to show declines in new-home sales and core capital goods.

Read more: Fed Set to Slow Hikes Again and Debate How Much Further to Go

Looking north, the Bank of Canada appears set to cap one of the most aggressive tightening campaigns in its history with what economists and markets expect to be a final 25-basis point increase in borrowing costs on Wednesday.

Policy makers led by Governor Tiff Macklem will probably stop short of declaring an outright halt to hikes, opting instead to hold the benchmark overnight night rate 4.5% while keeping a hawkish tone as they monitor how quickly the economy gears down.

The decision is complicated by conflicting data. Canada’s ultra-tight labor market continues to add jobs with unemployment near a record low, and economic output is set to expand in the final quarter of 2022 at about twice the pace of the central bank’s previous forecasts.

Annual inflation is still uncomfortably high at 6.3%, but underlying pressures show clear signs of abating. Canada’s heavily indebted households, meanwhile, are feeling the pinch of higher rates and starting to curb their spending.

Australia and New Zealand report their latest inflation figures in the middle of the week, as the Reserve Bank of Australia considers a pause in its tightening cycle and the RBNZ mulls its next move after a jumbo hike in November.

In South Korea, Thursday’s GDP results may show the economy shrinking, an outcome that could strengthen caution at the central bank.

In Japan, Tokyo CPI data on Friday should signal whether inflation is any closer to a peak in the world’s third-largest economy.

Two closely-watched South Asian economies — Pakistan and Sri Lanka — will decide on their key rates, along with Thailand.

The Philippines reports the 2022 performance of its economy, which President Ferdinand Marcos Jr. had estimated to have grown 7%.

Thailand’s finance ministry will provide its latest economic estimates later in the week. China will be closed all week for the Lunar New Year holiday.

The final window for European Central Bank officials to communicate before their Feb. 2 rate decision will close on Thursday.

Several appearances are scheduled before then, including two by President Christine Lagarde, who pledged to Davos attendees that she’ll “stay the course” on monetary policy.

Meanwhile, euro-zone data may give further indications of the health of the economy.

In Germany, where Chancellor Olaf Scholz is now convinced a recession will be avoided, the Ifo business sentiment report on Wednesday is forecast to show improvement across all gauges.

The UK faces a quieter few days than recently, with no Bank of England monetary policy speakers scheduled, and the PMI survey and public-finance data among the only items on the calendar.

In Hungary, the central bank will set its base rate at a monthly meeting on Tuesday, with investors then eyeing a potential pivot toward monetary easing at a deposit tender two days later. Further east, Ukrainian officials are seen keeping their benchmark unchanged at 25%.

Over to Africa, Nigeria’s central bank is expected to slow monetary tightening on Tuesday with a 50-basis-point increase. Inflation unexpectedly slowed in December, but remains well above the policy rate, deterring savings.

On Wednesday, policy makers in Mozambique will probably leave official borrowing costs unchanged for a second straight meeting with inflation forecast to slow.

After front-loading its fight against the worst global inflation shock in a generation, the South African Reserve Bank will probably also slow the pace of rate hikes on Thursday. Traders are pricing in a more than 80% chance of a 25 basis-point increase.

Brazil’s year-on-year result may only post an incremental move lower from 5.9%, while Mexico’s headline and core prints remain all but unchanged from their most recent readings of 7.86% and 8.34% respectively.

In Argentina, GDP-proxy data may disappoint for a third month, with the overvalued peso and near triple-digit inflation threatening a fourth-quarter contraction.

Chile’s central bank is all but certain to keep its key rate at a two-decade high of 11.25% for a second straight meeting on Thursday. Inflation running four times the target with the economy slipping into recession puts central bank chief Rosanna Costa in a tight spot.

Colombia watchers by and large expect Banco de la Republica to extend a record hiking cycle — a 12th straight rate increase to 13% — in the face of the sharpest bout of inflation in a generation.

Surprisingly, Finance Minister Jose Antonio Ocampo, a voting member on the board, on Tuesday said the bank doesn’t need to raise again and that inflation has peaked, both calls at odds with the bank’s own surveys of analysts. Something has to give.