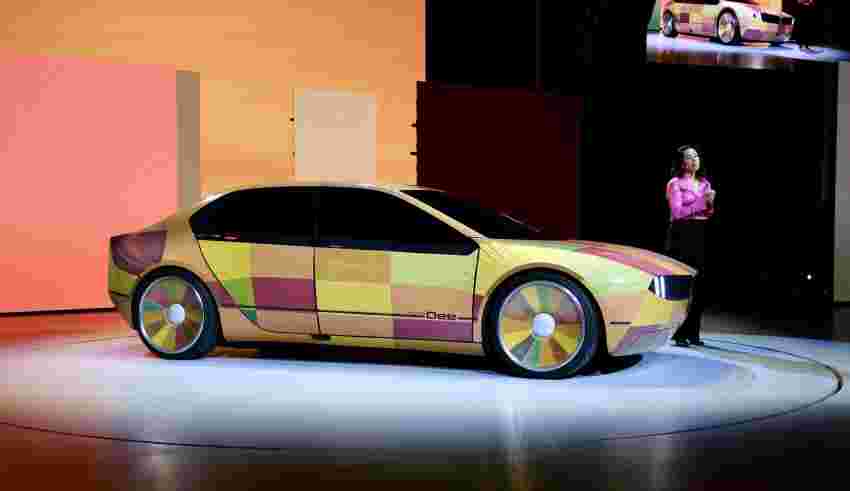 BMW is looking into the future of infotainment, car style and heads-up displays with the new i Vision Dee concept car.

The automaker revealed the i Vision Dee at CES 2023 to showcase some of its futuristic tech. It’s exciting stuff and it will be interesting to see how, and if, BMW includes all of the technologies in its cars over the next few years. The huge heads-up display promises the future, and it’s hard not to love a car that can cycle through 32 different colours, and there’s more to it than that, including new infotainment updates and core changes to how BMW thinks of its cars as technology.

The ‘Dee’ in the  concept car’s name stands for ‘Digital Emotional Experience,’ and the company is taking great lengths to truly present the car as something more personal, and personalizable, than in the past.

The customization of the exterior, the brave choice to develop its own infotainment stack instead of opting to work with Apple and Google, and finally, a new way for that infotainment to be displayed with a windshield sized heads-up display. This concept showcases BMW’s key moves going forward and starts to paint a clearer picture of how luxary automakers are adapting to connected cars.

A car with personality 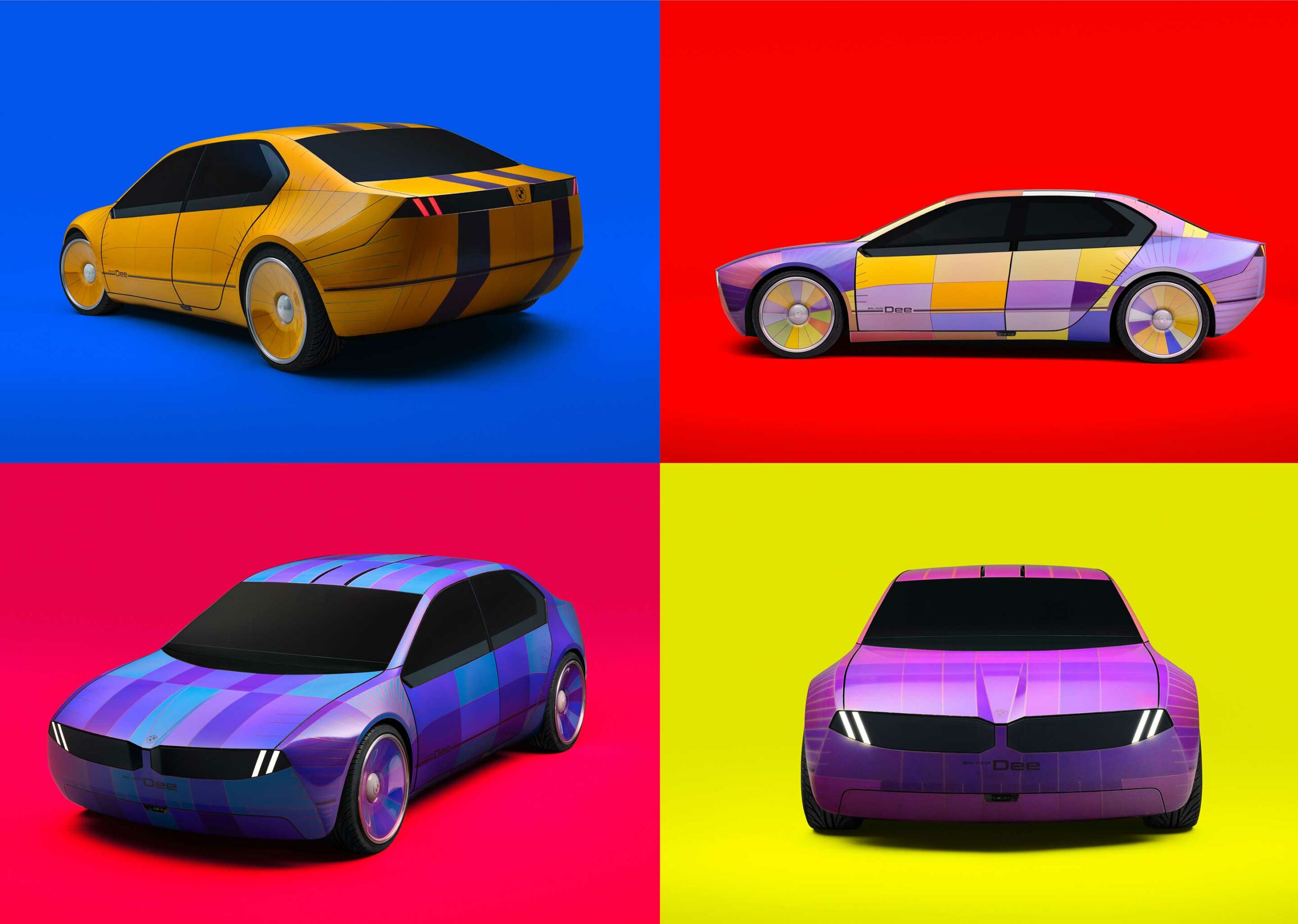 The colour-changing tech uses E-ink, and it can shift between 32 colours, unlike last year’s model which went between white and black.  The new version has 240 E-ink panels, so it can even become a gradient from one end to the other. This is the aprt that likely won’t come to consumer cars any time soon, but it is eye catching and rasies some fun ideas about the future of how a car can change to suit its driver.

The car even has a welcome scenario that can be personalized with graphics, lights and sound effects to really make the car feel like it belongs to the driver. The car’s headlights and grill also appear to be one unit and BMW says that in conjunction, the two parts of the car can display expressions giving the i Vision Dee a face.

It can even project an image of the driver’s avatar on the window as you walk up to further personalize the experience. It’s all very Need for Speed and looked fabulous. Considering the cost of E-ink, this is likely not something anyone will be able to have, but it’s a very cool achievement to curve it around the body of a car this way, and it’s mesmerizing to watch change.

Moving forward, BMW is looking to expand its infotainment section by swapping out its Linux backbone for open-source Android. This means that the company will get more access to apps and better background task management, but to be clear, it isn’t adopting the Google Automotive Services that GM and Volvo have begun to use.

This new system looks very similar to the BMW OS 8 from the iX and other newer BMWs, but there are a few key changes, like new climate controls and a redesigned central screen to bring media controls closer to the driver and a larger map for turn-by-turn nav. This system doesn’t look completely fleshed out, with the now-playing widget missing play/pause controls, but other perks like 3D maps in navigation help modernize BMW OS. 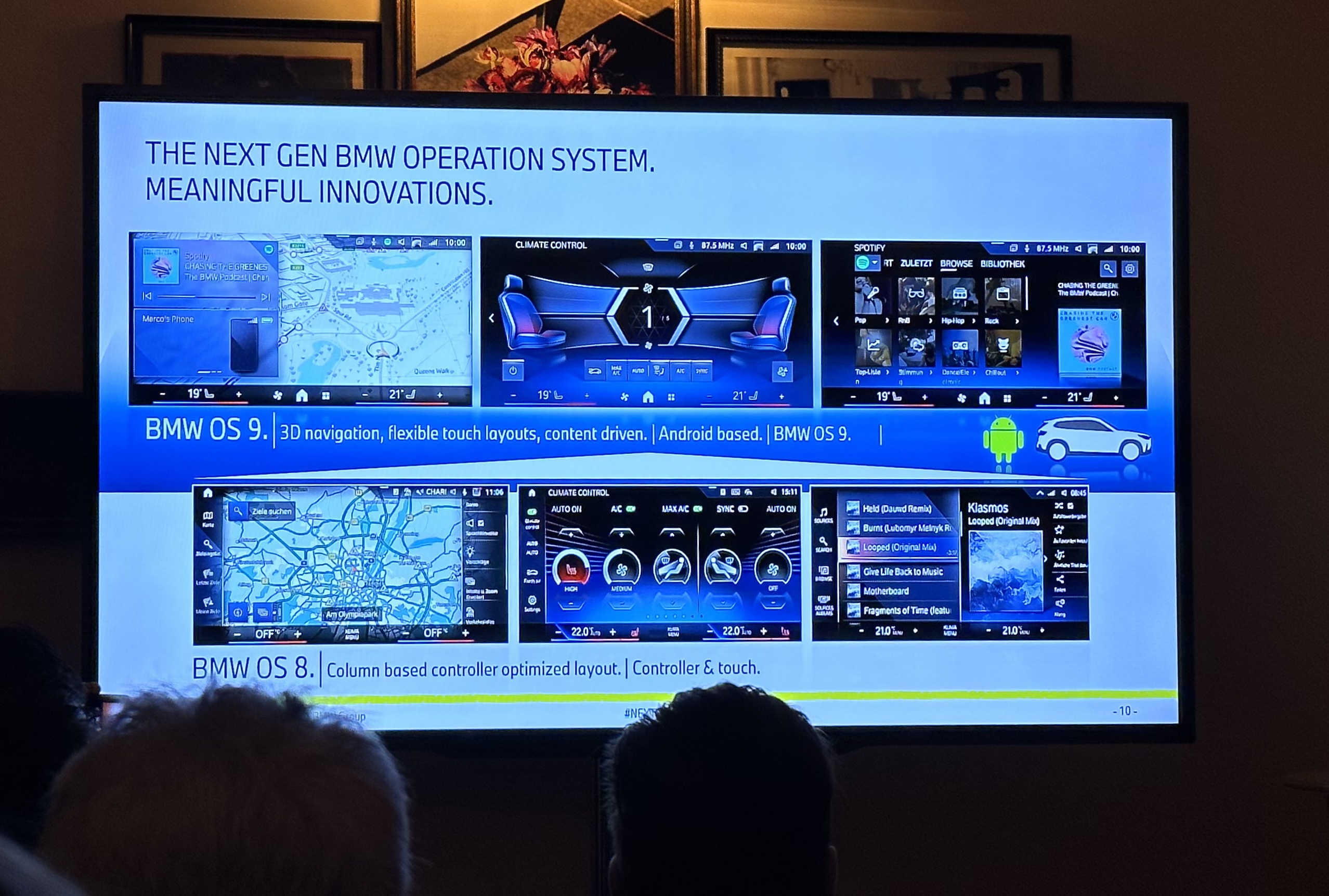 It’s a step in the right direction, but the software still doesn’t seem to have the polish of a modern smartphone OS. however, like modern smartphones, it’s built to make it easy for BMW to update it.  Enough time and commitment can lead to a much smoother operating system in a few years.

This custom work gives BMW a lead in features, but I worry Google and Apple will catch up to the bespoke automaker in features and will tieing cars and smartphones more closely together. Something that I’m not sure is super good for consumers moving forward, but it does seem like the easiest option for a lot of people.

It’s also worth noting that since this is open-source Android it’s unlikely that it has Google Play services which means no Google Maps, YouTube Music, etc. The company is pulling apps from the Aptoid app store, and its website claims that OEMs like BMW have final say over what apps make it onto the store in its cars. This should allow for a good amount of podcasting and music streaming apps, but it won’t do much to align your Google account on your phone with your car. 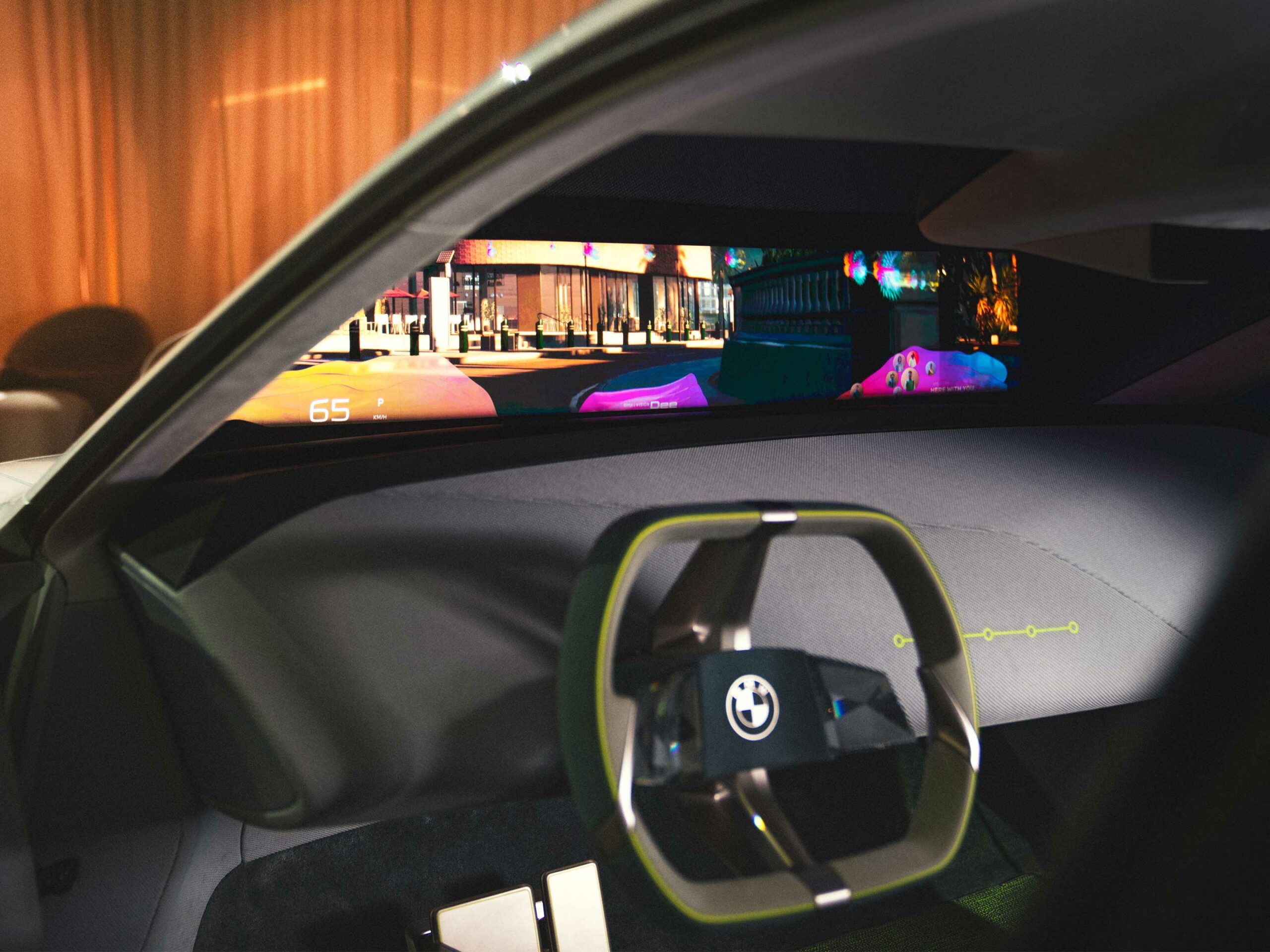 One area of the car that I haven’t gotten to go fully hands-on with yet is the new full windshield heads-up display. Stay tuned on Friday the 6th for an impression of that once I spend more time with the concept car.

That said, what’s the most intriguing thing about it is that it’s the part of the car that BMW has committed to bringing to its future Neue Klasse vehicles in 2025.

The concept car also has five levels of augmented reality, allowing drivers to see music playing, directions, speed, and more if they choose or they can dial it back to be just driving related information. You can also disable it of course if you want a more analogue experience.