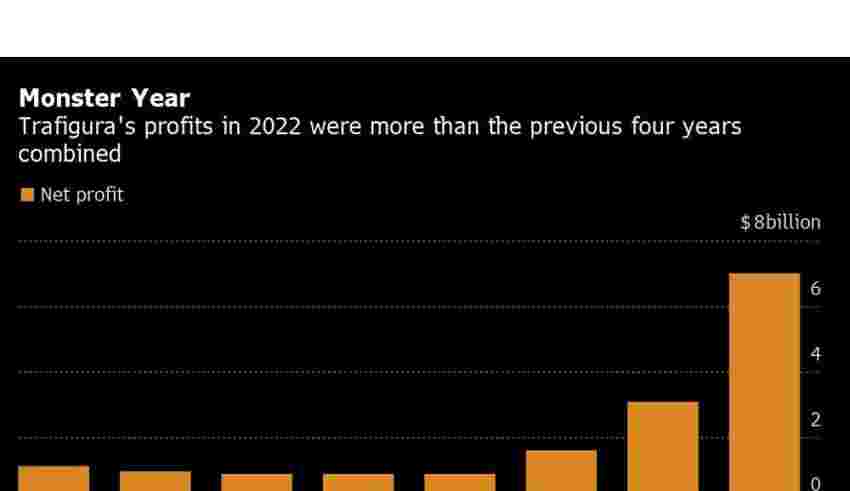 (Bloomberg) — Trafigura Group earned a record $7 billion in its last financial year, more than the previous four years combined, as the commodities trader cashed in on wild price swings and arbitrage opportunities driven by Russia’s invasion of Ukraine.

Earnings more than doubled in the 12 months through September, Trafigura said on Thursday, while revenue surged to $318.5 billion. The oil and petroleum products business had “an exceptionally strong year,” said Chief Financial Officer Christophe Salmon.

The volatility and disruptions sparked by the war have helped create the most profitable period in history for the companies that move energy, metals and crops around the world. Rivals including Glencore Plc and Vitol Group have also reported blockbuster results.

The massive profits are a boon for Trafigura’s top executives and traders, who own the company. The trader paid dividends of $1.7 billion, and the number of shareholders increased from about 1,000 to more than 1,100.

The industry’s role in supplying key commodities has been thrown into the spotlight following the war in Ukraine as governments around the world increase their focus on resource security. Trafigura announced earlier this week it signed a $3 billion German government-backed loan for gas supply, which followed a similar but smaller deal to provide metals to customers in Germany.

“We are interfacing a lot more with governments and regulators on particular issues, just providing market intelligence — what we’re seeing, what we’re thinking — so they can formulate good policy,” Chief Executive Officer Jeremy Weir said in a video posted alongside the annual report.

While the volatility caused by the war in Ukraine has helped drive commodity trading profits, the surging prices have also placed a huge strain on the industry’s balance sheets.

The Bank for International Settlements recently highlighted Trafigura’s leverage levels and reliance on short-term funding in a report drawing attention to liquidity strains in commodity markets. The company’s average value-at-risk — a metric measuring how much it could lose on an average trading day — quadrupled to $199.8 million during the financial year.

As profits surge, commodities traders have been plowing gains back into their businesses, in part to provide additional muscle to raise financing from banks. Trafigura added $7 billion of financing during the financial year, bringing its total credit lines to $73 billion. As profits soared, the company’s equity has almost doubled over the past two years, to $15.1 billion, it said on Thursday.

“We consider the current level more than adequate to support a $100 billion balance sheet,” Salmon said.

While Trafigura highlighted the record performance by its energy traders, its metals division was less successful, with operating profit down 24% from the previous year. The company attributed the weaker performance to lockdowns in China and to a loss at its zinc smelting unit Nyrstar due to soaring energy costs. Nyrstar “has had a tough year,” Weir said. “The high energy prices have been very challenging.”

The total volume of commodities traded during the period declined after long-term contracts for Russian crude oil and products were terminated in the second half of the financial year as a result of international sanctions.

Trafigura’s accounts didn’t say how much it had received for the sale of its 10% stake in Vostok Oil, Rosneft PJSC’s flagship Russian oil project, which it sold to little-known Nord Axis Ltd. in July. In its accounts, Trafigura said that it had recorded “no loss” on the exit from the investment, which it valued at $862 million at the end of September 2021.