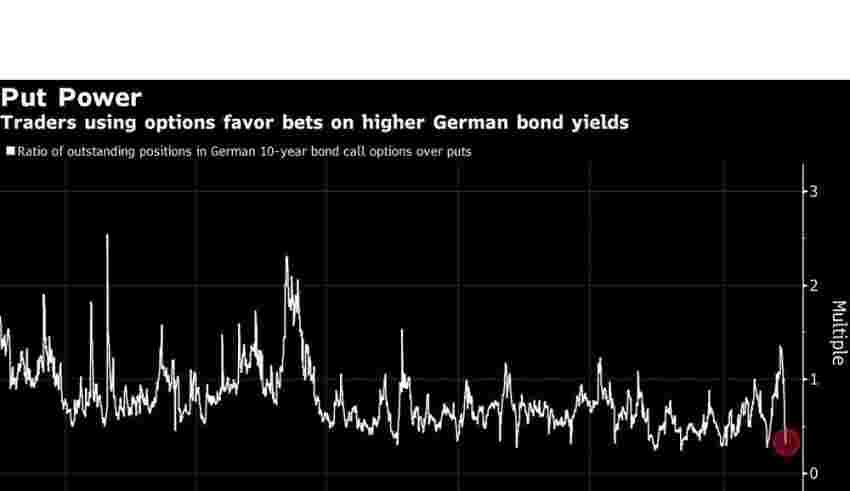 (Bloomberg) — A rally in Europe’s debt is showing signs of faltering as the European Central Bank’s plans to shrink its bond holdings risks burdening a market grappling with record supply and sticky inflation.

Signs of unease among investors are growing, with options wagers on a selloff in German bunds — meant to be the continent’s safest asset — tripling over the last two weeks. German and Italian 10-year bonds fell in the past week for the first time in a month, sending yields rebounding from three-month lows.

While a recent global debt rally has been driven by bets on easing price pressures, investors warn the inflationary backdrop is more troubling in Europe. Combined with a surge in borrowing, that means Goldman Sachs Group Inc. and BNP Paribas SA strategists expect German yields will climb to 2.75% in the first quarter, the highest in over a decade.

“The market has been pricing in all this benign news so it is vulnerable to an upset,” said Guillermo Felices, global investment strategist at PGIM, which manages $1.3 trillion in assets. “We have to be very careful because this could be the calm before the storm.”

At the ECB’s decision on Thursday, which will set the market’s tone heading into 2023, investors are anticipating details on how it will unwind its €5 trillion ($5.3 trillion) holdings of bonds bought under quantitative easing. While policy makers have pointed to a gradual approach, likely in the form of pausing the reinvestments of maturing bonds, it will still be colliding with a boom in government bond sales.

That’s being driven by fiscal programs designed to shield consumers from a cost-of-living crisis. Unlike previous government splurges in the past decade, the market will no longer be propped up by central bank bond buying. Private investors next year will have to digest the largest amount of euro-zone government bonds this century, banks warn.

Commerzbank AG strategists, for example, are forecasting German gross bond supply to hit 270 billion euros next year, a record in data through 2010. Given the weight of this issuance, investors may start demanding higher yields, even from economically stronger countries.

A €500 Billion European Bond Spree Is Looking for New Buyers

“Everyone’s always looking at the periphery,” said Jon Levy, senior sovereign analyst at Loomis Sayles. “Are we so worried about Italian fiscal policy that we forget some of the issues we ought to be paying attention to in so-called risk-free markets?”

The ECB, along with the Federal Reserve, is seen slowing the scale of rate hikes to 50 basis points next week, after a series of jumbo 75 pointers. Traders will be focusing on wage expectations and inflation forecasts.

Policy makers will need to see a drop in price growth to 2% by 2025 to pause a rate hiking cycle next year, according to Gurpreet Gill, macro strategist at Goldman Sachs Asset Management, which is underweight on euro-zone core rates.

The difference in the outlook between the US and Europe largely stems from the energy crisis hanging over Europe’s economy since Russia’s invasion of Ukraine earlier this year. Inflation driven by fluctuating gas prices makes it less predictable and likely to stay higher.

“It does feel like we’ve moved into a different regime for the inflation environment in Europe,” said Gill, pointing to the contrast with historically low inflation in the euro zone due to its free movement of labor. “The breadth of inflation is just much greater: it’s extended from goods and energy to services, particularly rents.”

The risk of another inflationary hit from surging gas prices is what’s keeping Mike Riddell, a macro portfolio manager at Allianz Global Investors, away from euro-area bonds, even though he’s buying US Treasuries on a bet inflation there will be overtaken by a recession.

“We’re more bullish on government bonds than we have ever been,” said Riddell. But in Europe there is a “huge risk” of a further supply-side shock with a winter cold snap creating the potential for another surge in gas prices, he said.

—With assistance from Alice Gledhill.