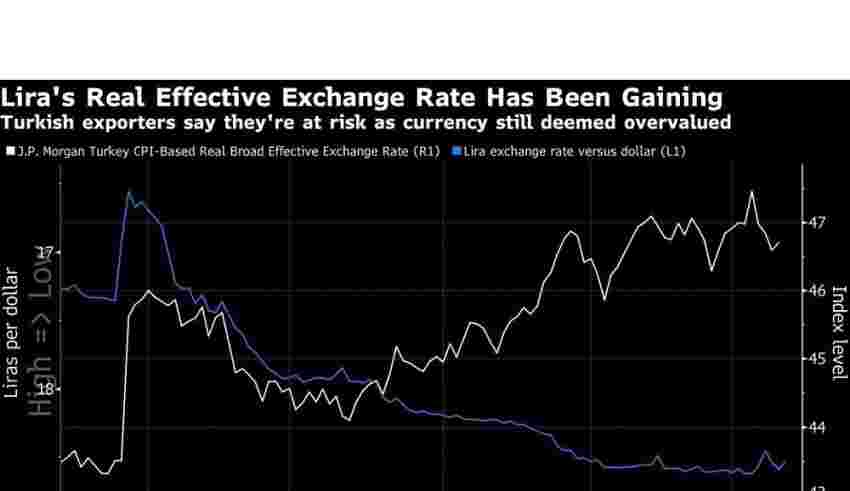 (Bloomberg) — A plunge in the lira that’s contributed to Turkey’s worst inflation crisis in nearly a quarter-century is still leaving the currency too strong to give exporters an edge over competition.

While nominal depreciation in the lira has kept it among the worst performers in developing markets this year, a policy paradox is emerging in Turkey as a result of measures to promote the use of the local currency and interventions by the central bank, which Bloomberg Economics estimates at as high as $75 billion in the first eight months.

The safeguards in place mean the lira hasn’t weakened enough to reflect inflation differentials and changes in the value of the currencies of Turkey’s trade partners. At stake for exporters is the competitiveness of their products at a time when demand abroad is already sagging as recession risks mount across large parts of the global economy.

The head of the Turkish Exporters Assembly has described the lira as “overvalued” and said this week the exchange rate should be allowed “to rise in tandem with inflation.”

The frustration is another glimpse into the competing priorities driving Turkish policy.

As the government of President Recep Tayyip Erdogan chases after growth by focusing on exports and investments, it’s allowed inflation to run wild without delivering credit to the parts of the economy that need it. At the same time, back-door measures deployed in support of the domestic currency are adding to disruptions for exporters.

Those contradictions have been on full display this year, with consumer inflation topping 85% and annual increases in factory-gate prices reaching 158% in October.

Exports are meanwhile failing to keep up with growth in imports amid a surge in Turkey’s energy bill. The trade balance has widened by 430% in October from a year earlier, according to preliminary data, with shipments by Turkish companies abroad rising by just 2.8%.

“We are suppressing the exchange rate with liraization policies,” a former economy minister, Isin Celebi, told Turkish broadcaster NTV on Thursday. He also called for the currency’s value to be determined by markets, and not at “the desks” of officials.

While the lira has lost more than a quarter of its value against the dollar this year in nominal terms, its real effective exchange rate — or REER — has been on the rise for months. The Turkish central bank’s REER index that takes consumer prices into account shows it’s gained nearly 3% in each of the past two months.

Measures used by Bank of America Corp. that include its fundamental equilibrium exchange rate model found that the lira “is the only overvalued currency” in emerging Europe, the Middle East and Africa, according to a report in late October.

The lira should drop by around 11% to “maintain the REER on its long-term trend,” Barclays Plc analysts said this week.

“We expect lira depreciation pressure to re-emerge at the end of 2022,” they said. “Significant depreciation is required due to the still very high inflation differential between Turkey and its major trade partners.”