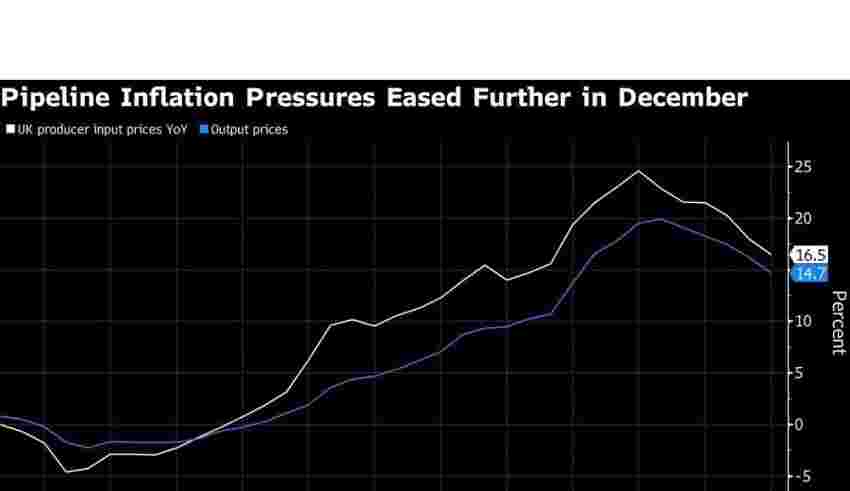 (Bloomberg) — UK factories’ fuel and raw material costs are rising at their slowest pace in almost a year, further evidence that pipeline inflationary pressures are easing.

Input prices rose 16.5% in December from a year ago, down from a peak of 24.6% in June, Office for National Statistics figures published Wednesday show. That was the slowest pace since February 2022.

There were widespread falls in raw material costs, led by imported food, chemicals, parts and equipment, and oil. That suggests some of the supply chain bottlenecks that appeared after the pandemic have started to ease.

Company input prices, or the costs they pay for raw materials, are a critical part of what feeds into the prices that consumers see in shops and the overall inflation rate tracked by the Bank of England.

The figures may fan speculation that the central bank is close to completing its fastest rate-hiking cycle since the 1980s. Data last week showed consumer-price inflation slowed for a second month in December.

Inflation remains in double digits, and the BOE is expected to lift interest rates for a 10th time in a row early next month to 4%. However, financial markets are now pricing in a peak of 4.5% by May.

On a monthly basis, producer input prices fell for a second consecutive time in December, declining 1.1% as the cost of crude oil fell.

Output prices, the cost of goods leaving factory gates, fell 0.8% in the month of December and were up 14.7% from a year earlier. That was the slowest annual pace since March.

Another promising development was a slowing in the pace of input costs growth for services companies. Services producer price inflation fell from 6.2% to 5.2% between the third and fourth quarters and is now the lowest it has been since the first three months of 2022.

Consumer price inflation has been rising in the services sector as companies in industries such as retail and hospitality pass on with higher wages and energy costs. As services account for four-fifths of national output, economists fear sticky inflation across that sector could be tricky to bring down.

There were still signs of price pressures feeding through in food supply chains as shoppers face accelerating costs on their weekly shop. The cost of food products leaving factories picked up to 17.1% compared to a year earlier, the most since records started in 1997.

PPI figures, which normally accompany the CPI each month, were put on hold following the release of October data after methodological errors were uncovered. Today’s report includes new figures for November and December together with an updated back series.

(Updates with details from the report from third paragraph.)