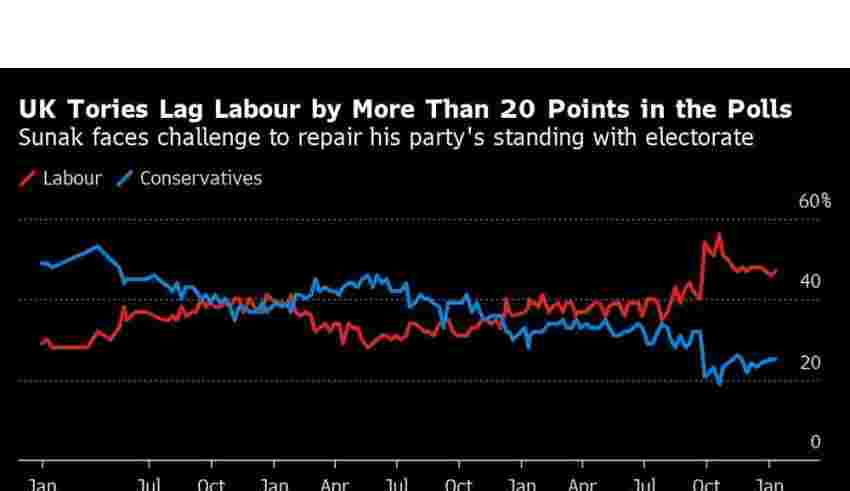 (Bloomberg) — The UK Labour Party said it would keep the freeze on household energy bills at £2,500 ($3,100) funded by a tougher windfall tax on oil and gas companies.

The opposition party said in a statement that Prime Minister Rishi Sunak’s plan to raise the cap to £3,000 in April would “expose households to a major new spike in prices.” It urged ministers to reverse the plan to lift the guarantee, which limits what a typical household could expect to pay annually on energy.

“Millions of households are still looking to a 40% increase in their energy bills,” shadow chancellor Rachel Reeves will say in a speech Saturday to the Fabian Society, according to the statement. “At the same time, energy companies continue to enjoy record profits. That cannot be right.”

Labour is increasingly portraying itself as a government-in-waiting, emboldened by a poll lead of more than 20 points with two years at most until the next general election.

Reeves will say a Labour government would pay for the freeze by strengthening the country’s existing 35% windfall tax on the profits of oil and gas companies, to the same rate as Norway  — where it’s 78%. Labour would also backdate it to the start of 2022 (the tax was introduced in May), bringing the total extra revenue from the levy to £13 billion between 2022-23, she’s due to say.

To be sure, the outlook for domestic energy bills is already improving, with the annualized energy bill for a typical household potentially dropping to just below £3,209 in the quarter through June, according to consultant Cornwall Insight. That’s almost 10% below the estimate of just two weeks ago. The figure falls to £2,241 in the final quarter of the year.

A mild winter has curbed power and gas demand, easing the burden on Sunak after rocketing energy costs fueled inflation last year. As a result, the government’s support package may slump to £3 billion in the next fiscal year from £25 billion during the current period, according to Investec Plc estimates.