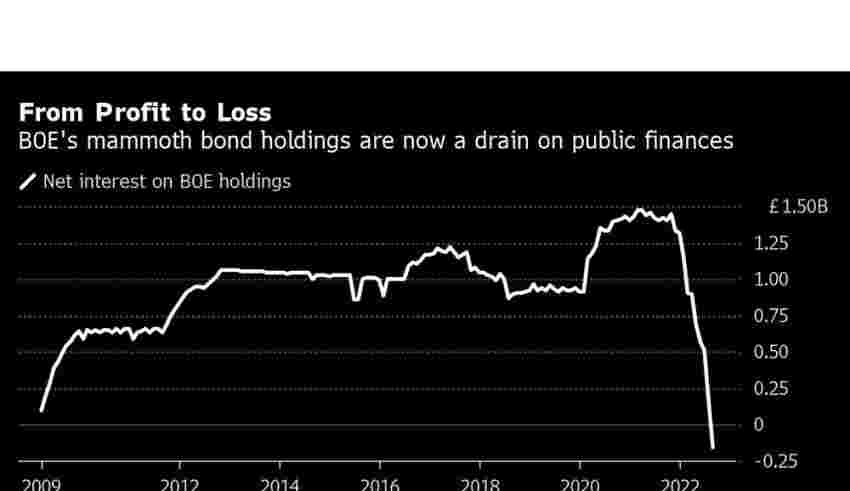 The British government should raid the banks for tens of billions of pounds to fill a black hole in the public finances, according to former Bank of England Deputy Governor Charlie Bean.

The combination of rising interest rates and the money printed as part of quantitative easing has handed banks “windfall” profits, Bean told the Resolution Foundation think tank on Tuesday. Those gains could be tapped to help cover a budget shortfall estimated at around £40 billion ($46 billion).

Prime Minister Rishi Sunak has warned that taxes will have to rise for everyone to stabilize the national debt and restore investor confidence in the UK that was rocked by his predecessor Liz Truss’s £45 billion unfunded tax cut giveaway.

The comments, published on Monday after talks with Chancellor of the Exchequer Jeremy Hunt, have been widely interpreted as a signal that the Health and Social Care Levy will be reintroduced. Sunak imposed the £13 billion tax on workers as chancellor earlier this year before it was scrapped by Truss. Reinstating it would only go part way to making up the fiscal gap, however.

The government is having to take drastic action to repair the public finances, which have been hammered by rising inflation, higher interest rates and stalling growth that has left the UK teetering on the brink of recession. Sunak has warned of difficult decisions on both taxes and public-service spending.

To ease the challenge, the government should consider “changing the structure of reserves remuneration” at the BOE to reduce the cost of servicing the national debt, Bean said.

Commercial banks are making big profits on the £880 billion of deposits they hold at the BOE, known as reserves, because interest is paid at the central bank rate. If the BOE raises rates to 3% on Thursday as expected, the arrangement will cost it £26 billion. The taxpayer is on the hook to cover losses.

Bean said that moving to a lower interest rate on some of the £880 billion of reserves “is something that could be done that would reduce debt interest spending but it would require the agreement of the Bank.”

Asked if he would back the plan now were he at the BOE, he said: “Yes. You are talking about tens of billions [of pounds] potentially.”

Bean, also a former director at the fiscal watchdog, the Office for Budget Responsibility, said the Treasury would probably prefer a bank tax. “You could think of the higher bank tax as a form of windfall tax -– they are benefiting from Bank Rate being higher to squeeze out inflation,” he said.

Banks argue that further taxes risk making post-Brexit Britain less attractive as a global financial center. They already pay a levy on their balance sheets and an 8% surcharge on their profits, and Hunt has so far not echoed a promise made by Sunak when he was finance minister to reduce it to 3%.

Bean is the second former BOE deputy governor to urge the government to consider the plan, after Paul Tucker published a paper last month in which he argued that a lower interest rate on some of the BOE reserves could save the taxpayer tens of billions of pounds.

Rachel Wolf, a founding partner at Policy First who co-wrote the Conservatives’ 2019 manifesto, said windfall taxes on energy companies and banks were relatively easy political options for Sunak and Hunt.