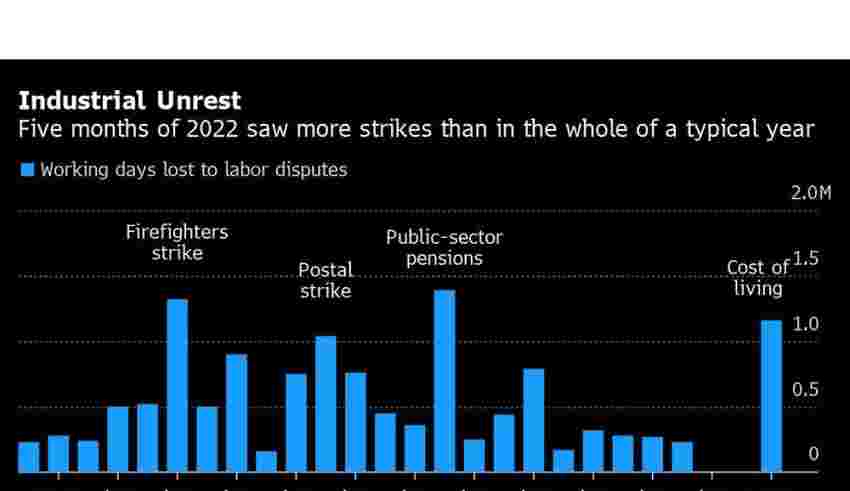 (Bloomberg) — British rail workers will walk off the job much of this week, paralyzing transport and adding to the troubles piling up for Prime Minister Rishi Sunak’s government.

Union workers will strike for five days starting Wednesday, snarling the usual return to work following the holidays and interrupting January sales that are crucial for retailers.

Nurses and ambulance drivers plan to strike later in the month as officials warn the National Health Service is struggling to cope with flu and Covid outbreaks.

Sunak’s response has been to hold the line against what he sees as inflation-busting pay raises. He’s blaming surging prices on Russia’s invasion of Ukraine, which cut off supplies of energy and wheat, boosting the cost of electricity and food. His New Year’s message warned of tough times ahead.

“I am not going to pretend that all our problems will go away in the new year,” Sunak said in the video message posted to Twitter on Saturday. “Just as we recovered from an unprecedented global pandemic, Russia launched a barbaric and illegal invasion across Ukraine.”

The Tories must call a general election by January 2025 at the latest, and the Bank of England anticipates the economy is already in recession and unlikely to grow until early 2024.

That downturn has been exacerbated by Britain’s exit from the European Union, which slashed trade links and left the UK the only economy in the Group of Seven nations that has yet to regain the size it had before the pandemic.

A Financial Times survey of 101 economists published Monday showed most expect the UK have the worst and longest recession of any G-7 country. Those quoted by the newspaper described the year ahead as “tough,” “bleak,” “grim” and “miserable.”

Government ministers, taking a page out of Margaret Thatcher’s strategy with the unions when she was prime minister in the 1980s, have maintained a confrontational stance with unions, threatening to lengthen the strikes.

“We’re not going back to the 1970s where the trade union barons thought that they ran the government,” Defence Secretary Ben Wallace said last week. “We’re not going to be held to ransom.”

The strikes and a disastrous budget that shocked markets in September have eaten into the ruling Conservative Party’s reputation with voters for handling the economy.

The Conservatives, in power for more than 12 years, trail the Labour opposition in polls. People Polling had the Conservatives 26 points behind in a survey for GB News released on Dec. 30.

Phil Banfield, chair of British Medical Association council, gave a stark warning about the scale of the crisis in the NHS.

“The current situation in the NHS is intolerable and unsustainable, both for our patients and the hard-working staff desperately trying to keep up with incredibly high levels of demand,” Banfield told the Press Association. “The BMA has repeatedly invited the government to sit down and talk about the pressures on our health service, but their silence is deafening.”

“The prime minister treats this as a top priority,” Halfon said on BBC News. “We’re increasing the NHS capacity by the equivalent of 7,000 beds, spending an extra £500mn to speed up hospital discharge and improve capacity.”

Wes Streeting, the Labour lawmaker who serves as shadow health secretary, said the government isn’t talking to NHS workers about their concerns about pay and conditions.

It’s “completely inexplicable as to why, given the front pages today, given what we’ve seen throughout Christmas and the new year, not a single government minister — whether it’s the prime minister, the health secretary — has raised their head or shown their face to say exactly what they are doing to grip this crisis.”

Rail disruption will intensify on Tuesday. The National Union of Rail, Maritime and Transport workers will stage a walkout on Jan. 3, 4, 6 and 7. The Aslef Union, which represents train drivers, said members will strike on Jan. 5.

The Royal College of Nursing said that members will strike on Jan. 18 and 19, following two days of historic industrial action in December. It’s the first time strikes have taken place on such a wide scale since the union was founded over a century ago. Ambulance drivers go on Jan. 11.

The risk is that anger among union workers snowballs into more concerted action reminiscent of the stoppages that paralyzed the UK in the 1970s and brought Thatcher to power.

“We don’t want to go on strike, but the companies have pushed us into this place,” Whelan told the Press Association. “They have not offered our members a penny and these are people who have not had an increase since April 2019.”

Mark Serwotka, general secretary of the PCS union, told Sky News last week that it was “only a matter of time” before “coordinated and synchronized” action was launched across the unions.

—With assistance from Andrew Atkinson.