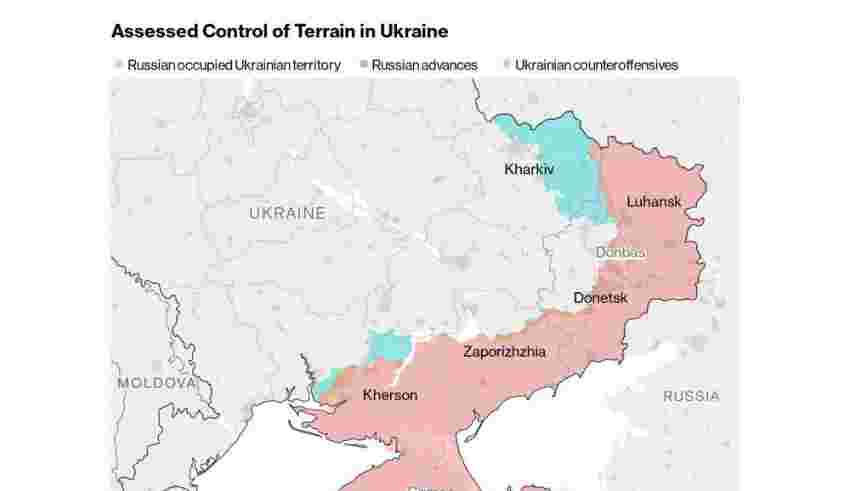 (Bloomberg) — Kyiv expressed caution about Russia’s announcement its troops are abandoning the Ukrainian city of Kherson, the first major regional center seized in its invasion, in what would be a highly symbolic reverse for President Vladimir Putin.

“Our emotions must be restrained. The enemy does not bring us gifts,” Ukrainian President Volodymyr Zelenskiy said in his nightly address. “Therefore, we move very carefully, without emotions, without unnecessary risk.”

Ukraine’s General Staff said Thursday it couldn’t confirm or deny a pullback after Russian Defense Minister Sergei Shoigu ordered troops to withdraw from the Western bank of the Dnipro River and move to the other shore. Ukrainian forces retook the frontline town of Snihurivka, a prominent local war correspondent reported Thursday, but there was no immediate official confirmation.

After Ukraine’s forces cut off their supply lines and pressured them at the front in the area, Russian troops and occupation authorities had been pulling out of Kherson and across the river for the last several weeks.

If confirmed, a Russian retreat from the city would be the latest major setback for the President Vladimir Putin in his nine-month-old invasion. Kherson was the only regional capital to fall to Russian troops and was included in the territories Putin illegally annexed in September. He vowed at the time that they would be Russian forever.

Putin has so far made no public comment on the retreat, leaving the announcement to Shoigu.

Russian officials sought to portray the pullback as an effort to protect troops’ lives, but military bloggers who’ve covered the war closely from the front lines were dismayed.

“In the eyes of the population, it’s a defeat,” said a telegram channel known as Rybar with 1.1 million subscribers. It blamed “political and military impotence.”

Ukrainian officials said the pullout was forced by their army’s continuing advances. Still, there were concerns that Russia might try to feign a retreat in hopes of drawing Ukraine into urban combat.

“Russians cannot be trusted, and the art of war includes the art of deceiving the enemy,” Deputy Defense Minister Hanna Malyar told a briefing. Russia hasn’t asked for any kind of corridor or other provision to pull back its troops, officials said.

Western intelligence had reported in recent days that the retreat appeared genuine and that Russia appeared to be trying to ensure it took place in an organized way, avoiding the chaotic retreats seen earlier.

“With limited crossing points, Russian forces will be vulnerable in crossing the Dnipro River,” the UK Defence Ministry said Thursday. “It is likely that the withdrawal will take place over several days with defensive positions and artillery fires covering withdrawing forces.”

The Ministry noted that Russian troops had destroyed bridges in the region and likely laid land mines to slow the Ukrainian advance.

Western military commentators said the Russian withdrawal appeared to be real, and likely means that Russia’s military will dig into defensive positions that would make it harder for Ukraine to achieve more territorial gains as winter sets in.

“This consolidation might also prolong the war,” said Mick Ryan, a military strategist and retired Australian army general. “With less territory to defend and coupled with an influx of mobilized troops, Surovikin can rebuild battered combat and support units,” Ryan said in a Twitter thread, referring to Sergei Surovikin, the Russian general recently appointed to lead the Ukraine war.

President Joe Biden told a news conference in Washington that the US “knew for some time” that Russia was preparing to pull troops from Kherson and called it “evidence of the fact that they have some real problems, the Russian military.” He said it was interesting that Russia had waited until after the US election to decide to announce a withdrawal.

Kyiv started a massive counteroffensive in the summer, retaking almost all of the Kharkiv region and some locations in Luhansk to the east.

Why Russia’s Nuclear Threats Are Difficult to Dismiss: QuickTake

Putin responded by escalating his now 9-month offensive, mobilizing at least 300,000 reservists, annexing four regions and unleashing a barrage of attacks on civilian targets. Starting Oct. 10, Russia has aimed hundreds of missiles and drones at critical power infrastructure across Ukraine, damaging about 40% of the country’s energy facilities, according to Zelenskiy.

Ukraine, meanwhile, is seeking to recover all its lands occupied by Russia, including Crimea and part of the eastern Donbas that Moscow has held since 2014 as well as territory that was taken since Feb. 24.