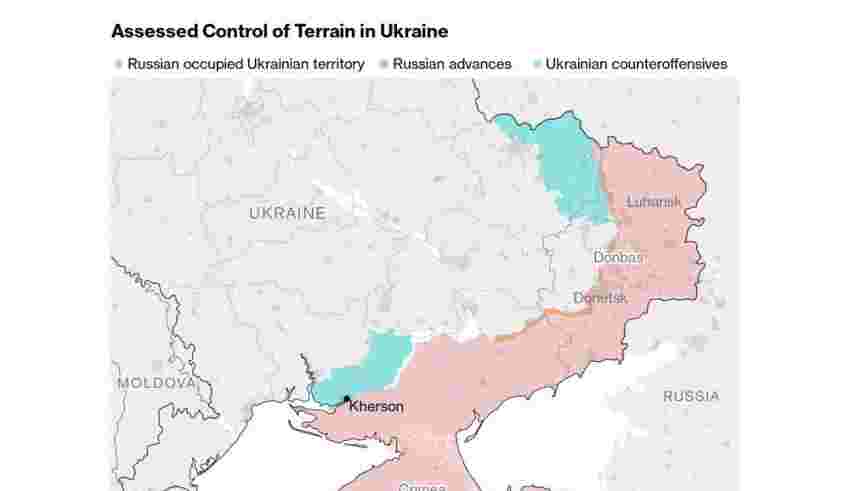 (Bloomberg) — Explosions were heard in the Ukrainian capital Kyiv early on Wednesday for the first time in more than two weeks. The damage from the attacks wasn’t immediately clear, with one official saying some of the sounds came from air defense batteries targeting drones sent by Russian forces.

Russia has been targeting energy and other key infrastructure for weeks with barrages of missiles as its troops remain bogged down on the ground. Those attacks have seen several cities and other areas of Ukraine hit by power outages, leaving citizens without heating during freezing temperatures.

As Ukraine fends off more attacks, the US is poised to send Patriot air and missile defense batteries, pending final approval from President Joe Biden, two US officials said.

Ukrainian troops repelled attacks near 14 settlements in the Donetsk, Luhansk and Kharkiv regions over the past day, Ukraine’s General Staff said on Facebook. According to its statement, Russian forces conducted one air strike, 11 missile attacks and more than 60 launches from multiple-launch rocket systems over that period.

Explosions rocked downtown Kyiv on Wednesday morning, Mayor Vitali Klitschko said on Telegram, adding that emergency services were heading to the site. Air raid sirens were activated in the city and the broader Kyiv region, as well as in the neighboring Zhytomyr area.

Anton Herashchenko, an adviser to Ukraine’s interior ministry, reported on Telegram earlier that blasts in the capital were heard as air defense systems targeted drones sent by Russian troops.

US Defense Secretary Austin, National Security Advisor Jake Sullivan and the head of the Joint Chiefs of Staff spoke with their Ukrainian counterparts, according to a readout from the Pentagon late Tuesday. They “discussed Ukraine’s priorities for security assistance,” according to the US statement, which offered few other details.

The US charged five Russian nationals, including a suspected Russian Federal Security Service officer, and two US nationals with conspiracy and other charges involving a global procurement and money laundering scheme on behalf of the Russian government, according to the Justice Department.

The defendants allegedly conspired to obtain military-grade and dual-use technologies from US companies for Russia’s defense sector and to smuggle sniper rifle ammunition in violation of US sanctions imposed earlier this year, the department said.

US Finalizing Arms Upgrade to Ukraine With Patriot Missiles (7:43 p.m.)

The US is poised to send Patriot air and missile defense batteries to Ukraine, two US officials said.

Ukraine’s government has urgently sought the system, produced by Raytheon Technologies Corp. and Lockheed Martin Corp., saying Patriots are needed to counter a relentless barrage of Russian missiles that have targeted its military as well as civilian and energy infrastructure.

The move to send the Patriot system may come within days, one of the officials said, but still requires a final sign-off by Biden and Defense Secretary Lloyd Austin. The decision was reported earlier by CNN.