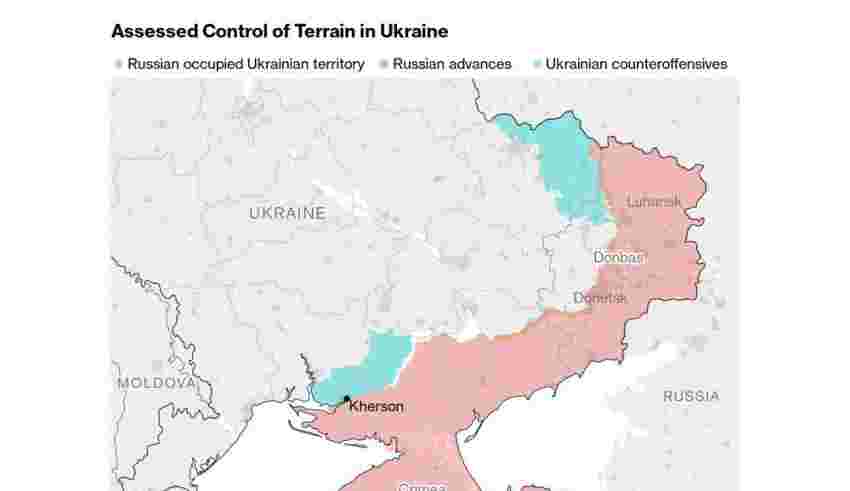 President Volodymyr Zelenskiy said Ukraine is bracing for “different variants of actions” by Russia following a meeting on Friday with his top military commanders. Ukrainian officials have warned that Russia may mount another big offensive during the winter, including a second attempt to capture Kyiv.

The US Congress passed and sent to President Joe Biden a sweeping government funding bill that includes $47 billion for Ukraine.

Russia’s economy is forecast to contract by 2.7% next year on the heels of the 2022 3.3% decline, before potentially expanding in 2024, according to a survey of economists.

Ukraine’s troops continue to repel Russia’s attacks in the eastern Donetsk and Luhansk regions. Over the past 24 hours, Russia’s troops carried out three missile- and 10 air-strikes, including on civilian infrastructure in Donetsk region, according to Ukraine’s Military Staff. On top of that, Kremlin troops launched 62 attacks by multiple rocket launchers, causing damage to civilian facilities in the city of Kherson, with casualties among local citizens.

Ukraine’s president said the country’s armed forces are preparing for “different variants of actions” by Russia, following a meeting with top military staff on Friday. The comments, in Zelenskiy’s nightly video address, came amid growing concerns that Kremlin may renew its offensive from the north, including another push toward Kyiv.

The US military has said it doesn’t see an indication of a coming offensive by Kremlin troops, thousands of whom are training in Belarus.  Even so, it’s a possibility that must be taken seriously, said analysts at the Institute for the Study of War.

“Moscow has been setting conditions for a new ‘most dangerous course of action,’ a renewed invasion of northern Ukraine possibly aimed at Kyiv,” since at least October,” the US-based analysts said. “This MDCOA could be a Russian info op or could reflect Putin’s real intentions.”

While an end to the Kremlin’s invasion of Ukraine doesn’t seem likely anytime soon, any peace deal must not reward Russia’s “land grab” or abandon the Ukrainian people to “the despotism and violence of their occupiers,” said German President Frank-Walter Steinmeier.

“Until peace can be achieved, it is an imperative of humanity that we stand by the attacked, the threatened and the oppressed,” Steinmeier said Saturday in an address to the nation. Europe is experiencing “rough times” and “facing headwinds” but nations on the continent have closed ranks and Germany is “rising to the challenge,” he added.

Ukraine’s government plans to upgrade its diplomatic service and strengthen its embassies, foremost in the countries of the Global South including Latin America, Asian nations, and the Pacific region, Zelenskiy said.

“The first are the countries in which our influence is still less than we need from the point of view of the national security of Ukraine and the interests of our people,” he said in his regular nightly statement after meeting on Friday with the nation’s entire diplomatic corps.

Passage of the spending $1.7 trillion spending measure by the House funnels $47 billion toward the effort to help Ukraine’s defense against Russia. It came two days after Ukrainian President Volodymyr Zelenskiy addressed both houses of Congress in his first trip outside his war-torn homeland since the invasion began in February.

“As the president of Ukraine said the other night, it isn’t about charity. It is about security,” said House Speaker Nancy Pelosi in her last floor speech as speaker.

The measure adds to the more than $65 billion already appropriated this year to address the conflict.

Rafael Mariano Grossi, director general of the UN’s International Atomic Energy Agency, had a lengthy meeting in Moscow on Thursday on his proposal to create a safety and security zone around Ukraine’s Zaporizhzhia nuclear power plant, which is occupied by Russian forces.

Grossi met with officials including Alexey Likhachev, director general of Russian state nuclear company Rosatom, after several recent meetings with Ukrainian officials in Kyiv. Discussions will continue, the IAEA said in a statement on its website.

“It’s key that the zone focuses solely on preventing a nuclear accident,” Grossi said. “The plant is located on an active frontline in the middle of a large-scale war. The situation remains extremely precarious.”

Ukraine Has Imported Half a Million Generators (2:25 p.m.)