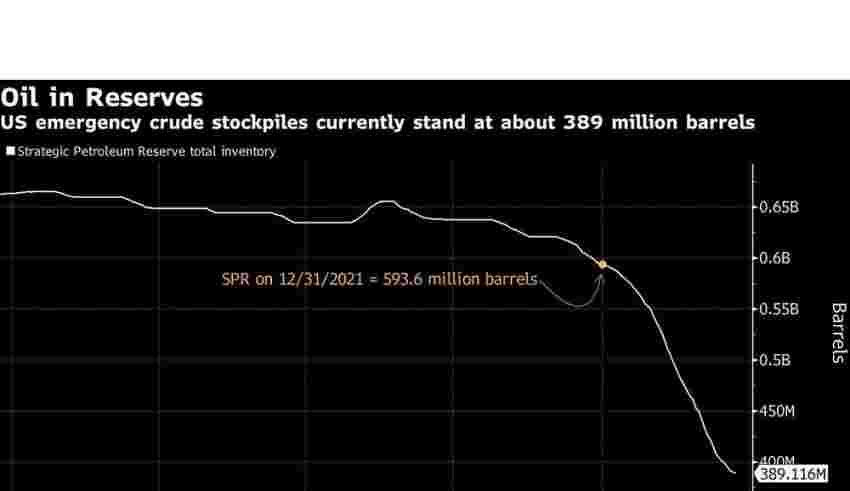 (Bloomberg) — The Biden administration is seeking to stop sales from the Strategic Petroleum Reserve mandated by Congress so it can refill the emergency reserve, a move that could impact the release of 147 million barrels of crude oil.

The Energy Department is seeking to cancel or delay sales mandated by Congress in fiscal years 2024 through 2027 so that it can move forward with a White House plan to refill the oil reserve when crude prices reach around $70 a barrel, an agency official told a Senate committee Thursday. Congress has mandated the sale of 147 million barrels of oil to pay for unrelated legislative initiatives during that time frame, including 35 million barrels in fiscal 2024, according to data compiled by research firm ClearView Energy Partners.

“It doesn’t make sense for us to be releasing oil while we’re trying to refill the SPR,” Doug MacIntyre, the department’s Deputy Director for the Office of Petroleum Reserves, said in testimony before the Energy and Natural Resources Committee. “We can’t fill and release from the same site at the same time.”

Such a plan, which would require congressional approval, could be attached to a must-pass government funding bill that could come together this month.

The Biden administration has said it wants to start purchasing oil to refill the SPR following a historic drawdown of 180 million barrels this year to lower prices amid Russia’s invasion of Ukraine and a surge in demand as the pandemic ended. Energy security adviser Amos Hochstein reiterated in a Bloomberg Television interview Wednesday that the US was looking for oil in a $70 range on “a consistent basis” for that to happen.

Instead, Wirth said in remarks made at the Economic Club of New York, the SPR should be refilled on a steady basis, to maintain stockpiles at appropriate levels while limiting price risks.

—With assistance from Kevin Crowley.