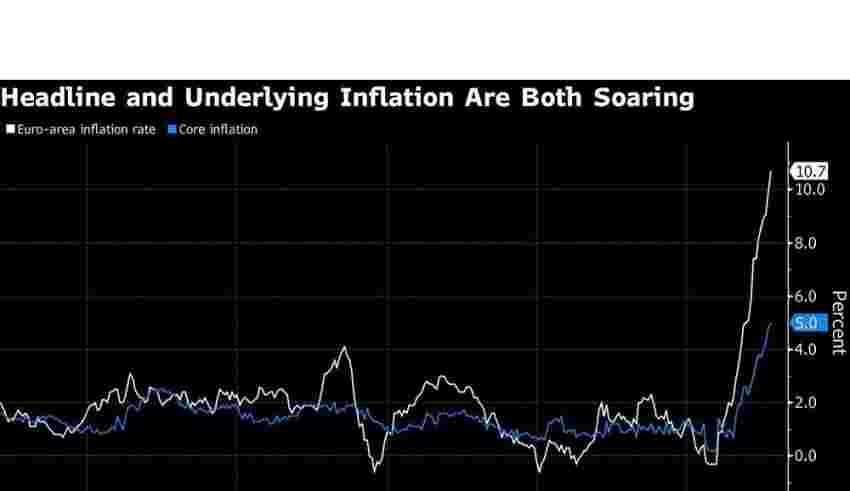 “As long as underlying inflation has not clearly peaked, we shouldn’t stop on rates,” the Bank of France Governor said in an interview with the Irish Times.

Focusing on underlying components of price gauges could mean that policymakers keep raising rates well into next year, even if overall numbers start to decline when energy costs ease. Data last week showed both headline and underlying measures hit record highs in October, just after the ECB doubled borrowing costs to 1.5%.

Villeroy said he expects headline inflation to reach its zenith in the first half of 2023 with the power component starting to fade “probably from next spring.”

While the French central banker raised the prospect of several more rate hikes next year, he also said the ECB could shift to a slower pace than at recent meetings as rates are already near a level he considers no longer stimulates the economy.

“It’s too early to tell where the end point in interest rates, or the so-called terminal rate, could be,” Villeroy said. “That said we are not far from the neutral rate, beyond which our hiking pace could be more flexible and possibly slower.”

He played down the risk that a recession in the euro area would force the central bank to stop raising rates, in part because the job market is still strong.

“We can raise interest rates without provoking significant unemployment,” Villeroy said. “To determine the level of growth next year, energy is more important than monetary policy. Our aim is not to provoke a recession but to tame inflation.”