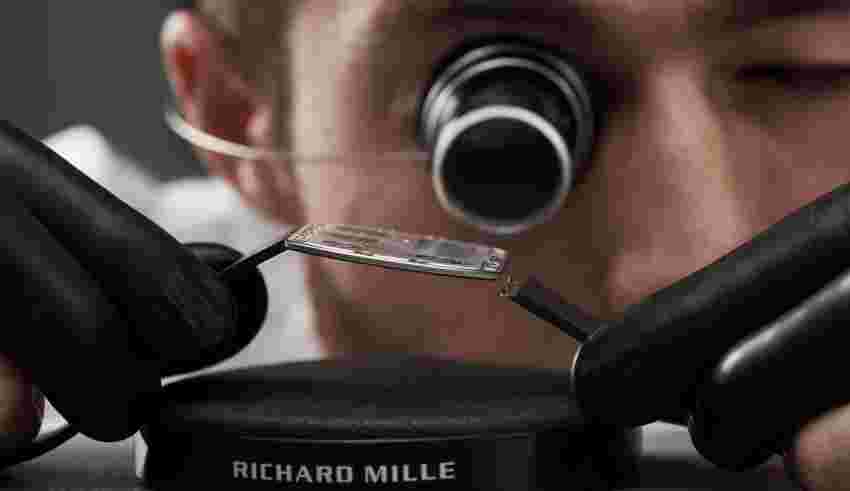 Watchmaker Richard Mille teams up with Ferrari and slims down its product to set a world record.

Standing in the Ferrari workshop in the middle of the Italian town of Maranello is like nothing else you could imagine. Big open spaces, quiet corners, and gardens with towering trees invite workers, and the rare guests who are allowed to enter (always without cameras), to be part of an environment designed to achieve exceptional performance. The reason for this particular visit: the unveiling of the new world-record-breaking watch that comes as a result of the partnership between Swiss independent watch brand Richard Mille and Ferrari.

The joint unveiling of the world’s thinnest mechanical watch — the RM-UP 01 — took place in a Ferrari building alongside the Ferrari museum, a few blocks from the factory. It was the perfect setting to make a statement about the relationship between Richard Mille, which bills its watches as “racing machines for the wrist,” and the Prancing Horse.

For this project, Richard Mille collaborated with the creative laboratory of Audemars Piguet in LeLocle, Switzerland. According to Yves Mathys, general director of the Richard Mille factory in Les Breuleux, Switzerland, the independent maker had to set aside all previous knowledge of big complications aside to compete in the ultra-thin realm.

“Like Ferrari, which continuously seeks to gain another few thousandths of a second while racing, we fought to shave off the last hundredths of a millimeter to achieve the flattest possible watch,” Mathys says. “But those last dozen or so micrometers were hard won in a long and arduous process.”

More than 6,000 hours of research, development, and testing went into the making of the RM- UP 01. A daring departure for Richard Mille, whose signature aesthetic usually results in in-your-face tonneau-shaped skeleton watches with ingenious cages and high-tech materials. The RM-UP 01 watch is none of that, and its unveiling was met with gasps from a stunned audience, most likely expecting anything but ultra-thin.

Typically using advanced high-tech materials and outrageous sizes meant to go the distance with its sports ambassadors (Bubba Watson’s $750,000-dollar watch on the golf links, or Rafael Nadal’s $1 million watch on the tennis courts), Richard Mille slimmed way down for this marvel. It flipped the vertical tonneau-shaped case onto its side to form a horizonal playing field across the wrist (measuring 51 millimeters in diameter) and elongated it in order to set what may well be
an unbreakable record.

Not only is this watch the thinnest mechanical timepiece in the world — only 1.75 millimeters in thickness (about the thickness a dime) — it also slashed another world record thanks to its “traditional” inner stand-alone movement, measuring 1.18 millimeters, the thinnest mechanical movement in the world. The watch is also astoundingly lightweight at less than 3 grams, or a tenth of an ounce, slightly heavier than a penny.

Naturally, Ferrari weighed in on certain aspects of the watch, including typeface for the numerals, hand styles, case material (titanium), and the alluring laser-engraved stallion on the right side of the dial that is so exact you can see the horse’s muscles. The time indication of the watch appears in a subsidiary dial, centered at the top center, and the balance wheel on the top-right has been flattened and enlarged to allow for greater thinness while still delivering an acceptable power reserve.

Unlike other watches, there is no middle case in this timepiece. There is a front, a back, and a gasket that holds the movement in place within the allotted space. The only crystals are the tiny round ones that protect the time indication and the balance spring, whose unique ultra-flat escapement system is patented.

Devoid of a crown for winding — which would take up case space — the watch is equipped with a winding crown and a setting crown that are actually wheels integrated into the case and visible on the front. One can use a tool to wind the watch or just poke a finger in there and turn the wheels manually — a wild concept in and of itself.

From its almost 1970s vibe to its breathtaking price of $1.88 million, the sophisticated ultra-thin titanium RM-UP 01 wows with so much unexpected newness. Only 150 pieces will be made, and taking it in at the unveiling in Maranello, there already seemed to be a waitlist forming.

This article appeared in our October 2022 issue.