Home News Waiting on Holiday Food-Shaming from Bill Gates, Greta Thunberg, and the Rest of the Climate Crazies – The Published Reporter® 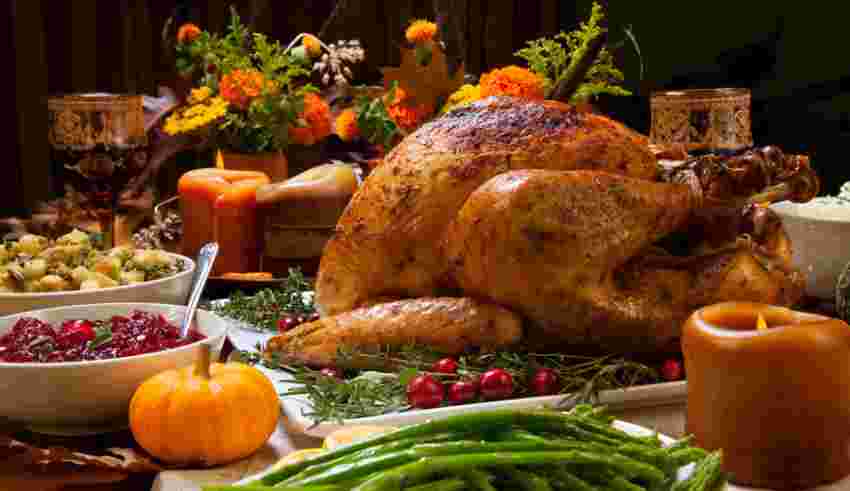 PORTSMOUTH, OH –The festive holiday season with meat galore, traditional dishes, and gooey desserts is just around the corner, and that means the climate czars (aka Al Gore, John Kerry, Klaus Schwab to name a few more crazies) will be asking themselves a few questions:

We can bribe the mainstream media to broadcast a story that eating birds and pigs cause cognitive malfunctioning with bumbling Biden as an example. That’ll pave the way for a Barack Obama takeover, er, we mean Harris.

We will arrest all the grannies before Thanksgiving and hold them without bail until Spring. That’ll show ‘em.

We’ll send a surprise PETA package to every household before Christmas with nothing inside but a warning against eating animals and a hammer.

“Globalist elites will be dining on a gourmet selection of meats, fish, and dairy at the United Nations COP27 climate change conference in Egypt, as they push supposedly more sustainable foods like bugs,” according to Breitbart.

Hmmm. The hypocrites dine on tasty animal dishes while pushing bugs for the rest of us peasants.

The article continues, “The menu flies in the face of the stated goals of the United Nations, with a 2018 Intergovernmental Panel on Climate Change (IPCC) report saying: “Meat analogues such as imitation meat (from plant products), cultured meat, and insects may help in the transition to more healthy and sustainable diets.””

Holiday News from the PETA Crazies

“Did you know that around 300 million turkeys are killed in the U.S. each year, many for Thanksgiving and Christmas dinners? On factory farms, these kind, intelligent, feeling individuals endure short, stressful lives and are often unable to engage in natural types of behavior (yes, even on “humane” farms).”

I’ll bet PETA cheered over the Pardoning of the National Turkey on the White House lawn.

Okay, I perused the blog of Bill Gates to collect information. Here’s what I found:

“The holidays are a great time for annual traditions. Like many people, I love to spend the end of the year celebrating the holidays with my family. (We usually wear matching pajamas on Christmas.)”

Double cringe. Gates, you are divorced and your three kids are adults. Are goofy matching jams a wistful holiday wish? Please – no pics of you in footie pajamas on the front page of The New York Times or The Washington Post. That would be a nightmare in nightwear. I’m even starting to sound holiday cheesy. Eek.

And how interesting that Gates put “friends for more than a decade” and fellow World Economic Forum pal Bono’s memoir on his 2022 book list for Christmas gifts.

“The Gates Foundation is a major supporter of ONE, the nonprofit that Bono helped start.”

Gates gets a tax deduction and Bono only has to give a percentage to charities. Aren’t loopholes grand for the wealthy?

A 2017 opinion piece in the New York Post titled “Inside Bono’s boundless hypocrisy,” noted “Over the years, it has often been shown that what Bono says and what he does are two different things.”

A 2010 article in Breitbart reported that “Bono’s anti-poverty foundation ONE is under pressure to explain its lavish salaries after it was revealed that only a small percentage of money it raises reaches the needy.”

Is Gates going to Africa to buy up their farmland as well? That’s his 2022 Christmas gift to himself.

“Bill Gates, on a visit to Kenya, has announced his foundation will spend $7 billion to improve health, gender equality, and farming in Africa,” according to a recent article in Philanthropy.

Let’s review. There is no carbon emission climate crisis that is going to annihilate the planet and the people. The biggest hoaxers are the WEF, UN, and WHO.

However, climate crazy activist Thunberg has put out another book: “The Climate Book: The Facts and the Solutions.” The world does not need another stupid account of falsehoods. Greta, please go off to college, learn a trade, or get a real job.

Fridays for Future, the group inspired by Thunberg, recently held protests in 450 locations. Stories are flooding the news of protestors gluing themselves to private property and then expecting the businesses to cooperate with their demands. Why the sharp uptick in protests? Are these grassroots protests or is this a political scheme? Find the answers at the Environment and Climate News Podcast.

Happy Thanksgiving because God is good all the time.