Bank of Canada governor Tiff Macklem said a surprisingly weak Canadian dollar is complicating his fight against inflation, and could result in higher interest rates than would have been necessary if the loonie was behaving as it has in the past.

The comments followed the central bank’s surprise decision on July 13 to increase the benchmark interest rate a full percentage point after the Bank of Canada‘s latest quarterly outlook predicted headline inflation was on track to crest eight per cent this summer, a startling number for a group of policymakers charged with keeping the consumer price index advancing at an annual pace of about two per cent.

“In terms of this decision, the fact that we haven’t seen as much appreciation of the Canadian dollar means we’ve got to do more through interest rates,” Macklem said in an exclusive interview with the Financial Post’s editor-in-chief Kevin Carmichael after the central bank announced that it had decided to push its policy rate to 2.5 per cent, the highest since 2008. “That is something we’re taking into account.”

The Canadian dollar hasn’t traded higher than 80 cents against the U.S. dollar this year, a low ceiling considering oil prices have surged well above US$100 per barrel. Canada exports lots of energy to the United States, so typically, higher oil prices drive up the value of the currency American importers need to purchase Canadian crude. 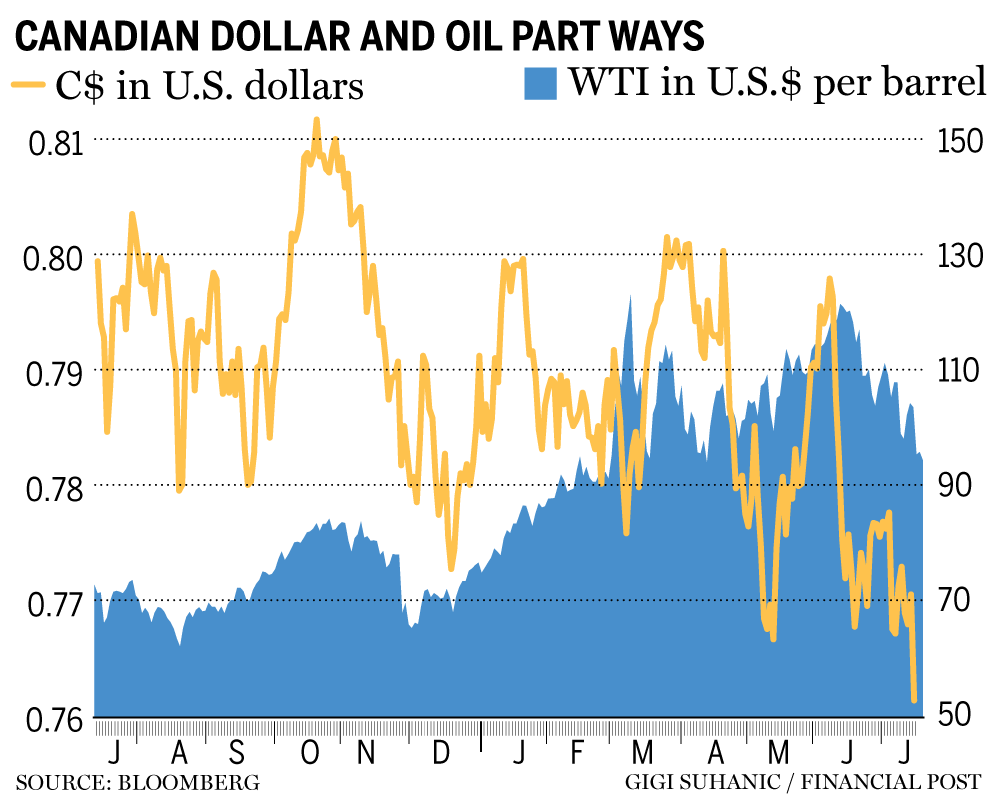 It’s an inopportune time for that link to breakdown. The consumer price index increased 7.7 per cent from May 2021, the biggest gain in four decades, in part because of higher costs for consumer goods. A stronger exchange rate would have offset some of those cost increases by making imports less expensive.

“Historically, when oil prices have gone up, the Canadian dollar has acted as a bit of an automatic stabilizer in the economy,” Macklem said.

“When the price of oil in U.S. dollars goes up, the Canadian dollar tends to appreciate. What does that do? One, it dampens the inflationary shock for households at the gas pump, because it means the price in Canadian dollars doesn’t go up as much because the Canadian dollar absorbs some of that,” the governor added. “The other thing it does is that it spreads the benefits to Canada of a higher oil price because we’re an oil exporter. It spreads it more across the economy.”

The loonie got some initial lift from the Bank of Canada’s super-sized interest rate increase, but the boost didn’t last. The Canadian dollar was trading at about 77 U.S. cents around midday Toronto time, roughly the same as earlier in the week.

That’s probably because markets are laser focused on what’s going on in the United States. The U.S. dollar has been on a tear, pushing towards 20-year highs following the release of data on July 13 that showed the U.S. consumer price index increased 9.1 per cent from June 2021 — outpacing economist expectations and the fastest since the end of 1981.

“The dollar is crushing every major currency in its path,” Karl Schamotta, chief market strategist at Toronto-based financial consultant Cambridge Mercantile Corp., said in a note to his clients. “Evidence of a continued acceleration in prices, coupled with a broadening in core pressures have heightened expectations for a more aggressive response from the Federal Reserve in the near term — while also raising the likelihood of an economic downturn further out.”

Schamotta added that the U.S. inflation numbers likely will force the Fed to follow the Bank of Canada and implement a one-percentage-point increase of its own. So, whatever boost the Canadian dollar might have received in the current interest-differential with the U.S. was lost the moment markets bet the gap would be short lived.

“This has led to an unusual situation in which funds are flowing into the United States for yield-seeking and safe-haven reasons — a combination which is taking a devastating toll on major and exotic currencies across the foreign exchange markets,” Schamotta wrote.

The Bank of Canada said in its July monetary policy report that a weaker link between the currency and oil prices was one of the reasons it failed to see the inflation surge coming. Because the central bank’s models relied on traditional relationships, they under-predicted the effect of oil prices on inflation.

Macklem said the link between oil prices and the loonie has broken down for two main reasons: a shift in the longer-term outlook for Canadian oil exports and expectations for U.S. monetary policy.

The other part of the equation is the U.S. dollar is taking flight faster than the loonie as the Fed aggressively increases interest rates, the latest move being a 75-basis point hike in June. Macklem noted the loonie is strong against other countries’ currencies, but has fallen behind its southern counterpart, making the Canadian dollar appear more of a laggard.

“The U.S. Federal Reserve has done a rapid monetary-policy pivot and so interest rates have gone up very quickly,” Macklem said. “That’s strengthened the U.S. dollar a lot, and the exchange rate for us that matters the most is the U.S. dollar exchange rate because 75 per cent of our trade (goes to the United States).”