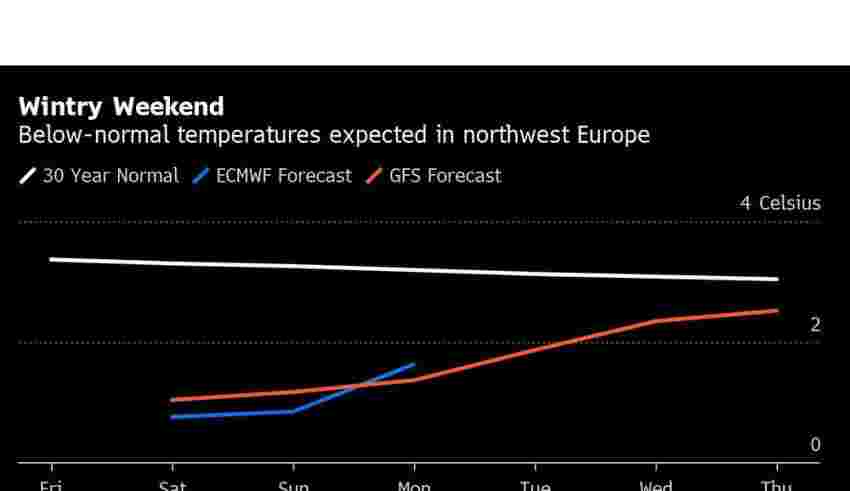 Icy weather is expected across western and central Europe and the UK this weekend and will likely persist until early next week, when temperatures are forecast to rebound near seasonal norms.

London temperatures are seen 4.2 degrees Celsius below the usual average on Sunday, while Paris will be 5 degrees Celsius colder than the norm, according to Maxar Technologies Inc.

“Temperatures over the weekend are forecast to be colder than normal from Germany into France, eastern Spain and Italy,” said Matthew Dross, meteorologist at Maxar.

Wintry conditions are hitting the continent after an unseasonably warm start to the year that helped ease Europe’s energy crunch. Curbed heating demand in recent weeks even allowed some countries to top up natural gas supplies at a time when they’d usually be tapping storage.

While Europe’s energy supply seems to be out of the woods for this winter, storage levels at the end of heating period will determine how well the continent is equipped for the year ahead.

Some parts of the continent will face unseasonably mild temperatures, including from Greece northward into Romania and Ukraine, where average temperatures are seen between 4 and 9 degrees Celsius, according to Dross.

Next week, colder-than-normal conditions are expected to persist across northern, central and western mainland Europe, according to forecasters, while UK temperatures are seen trending warmer.

Further ahead, some meteorologists see the possibility of a so-called “sudden stratospheric warming” event, which is when rapid warming occurs high up in the stratosphere. That can — but doesn’t have to — lead to changes in the weather at the surface, and can result in extreme bouts of cold weather.

At the moment, meteorologists are not seeing enough evidence to conclude that an SSW will have a large impact in January, but are watching the event into February for potential colder ramifications.

“While we continue to see the odds of an eventual SSW increasing, any direct impacts at the surface would not be in play until at least late in February,” said Amy Hodgson, director of Europe meteorological operations at Atmospheric G2. The event could increase the chance of a “cold outbreak somewhere in the Northern Hemisphere, but this could be across North America or Asia.”