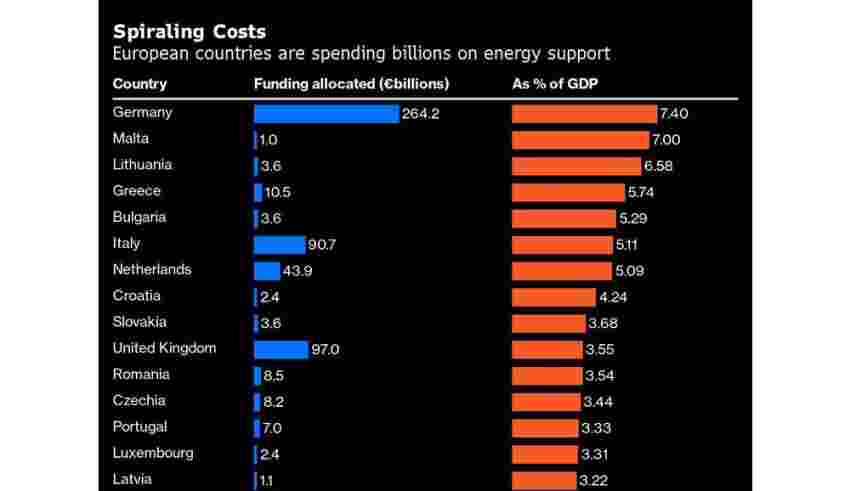 Britain is weathering the worst cost-of-living squeeze in memory better than indicated by dire projections for a catastrophic recession.

Real-time indicators and surveys point to the health of consumer spending and business investment. They suggest a deep recession is unlikely following official figures that showed surprisingly strength in both October and November.

An Institue of Directors survey showed the number of executives planning to increase invesment in the next year outweighed those anticipating cuts, with 5% set for “much higher” spending.

The data along with softening inflation and falling energy costs are a boost for Prime Minister Rishi Sunak’s government, which is struggling to contain the fallout from crippling strikes and plummeting disposable incomes. It also complicates the Bank of England’s calculations on how quickly to raise interest rates.

For months, the central bank has projected that the economy had already tipped into a recession in the second half of last year. It expects no growth until 2024, when Sunak is likely to fight another election.

Friday’s figures from the Office for National Statistics showed the economy grew slightly in two of the final three months of 2022, meaning a recession probably won’t start until this year at the earliest. While the UK still is projected to have the worst and longest slump of any Group of Seven nation, there’s signs the downturn may be less protracted than feared.

“The current downturn may be shallower than we had initially expected. That won’t matter much for the Bank of England’s next policy decision — the committee is laser-focused on inflationary pressures. It could, however, carry more bearing further out. If the economy doesn’t weaken enough to cool the labor market, the BOE may be forced to do more.”

Data due out next week are likely to show that companies kept hiring in December, bidding up wages for workers at a historic pace. Economists surveyed by Bloomberg also expect inflation will tick down further from 10.7% in November and that retail sales are likely to have rebounded in December.

Industry groups led by Make UK and the Institute of Directors say British factories and small businesses still plan to plow investment into the economy this year. That’s despite recession warnings and dismal confidence readings.

“What we found was, even though you’ve got those difficult challenges at the moment, there are some green shoots,” said Bhavina Bharkhada, head of policy and campaigns at Make UK.

Make UK’s survey this week showed that manufacturers’ investment plans have held up in recent months, with executives planning to pump money into new products and energy efficiency. More than two-thirds of factories are pumping investment into product development and training staff, while over half are spending to boost energy efficiency.

Kitty Ussher, chief economist at the IOD, said there’s a “marked” difference in the way business leaders felt and how they were acting. While sentiment is near rock bottom, investment intentions are near levels last seen in 2019, before the pandemic hit, according to the latest survey from the group that represents company executives.

“In 2019 confidence was pretty low, but you also had investment intentions pretty low as well,” Ussher said. “They correlated really well. What’s really noticeable at the moment is confidence is as bad as the beginning of lockdown, yet the economy is fully open.”

The IOD’s surveys indicate business leaders are still alarmed about high levels of inflation, which have largely been caused by sky-high energy prices. Ussher thinks optimism could grow again this Spring so long as inflation eases in line with the BOE’s forecasts and the situation in Ukraine doesn’t deteriorate.

Shoppers also appear to be withstanding soaring energy and grocery bills, shaking off a historic shock to their disposable incomes. Richer households that account for the lion’s share of spending haven’t cut back as much as poorer ones.

Credit and debit card data showed the strength of demand in recent weeks along with an easing of financial conditions, according to Panmure Gordon. Stock prices have risen while market interest rates and mortgage costs have fallen in the past quarter with Panmure’s own financial conditions index easing back to +0.4 after soaring from -0.5 to +0.7 in the first 10 months of 2022.

Retailers including Marks & Spencer Group Plc and Tesco Plc, have reported strong Christmas sales, an indication that households are still opening their wallets. Consumer confidence has also begun to climb away from record lows.

Card spending in late 2022 outperformed 2021 levels, said Simon French, chief economist at Panmure Gordon. Households are enjoying a tax break and support for natural gas and electricity bills that’s among the most generous in Europe.

“There’s a risk of a hangover in the first half of the year,” French said. “There’s the risk the jobs market and the property market lean in against what has been a near term outperformance. I’m still thinking there will be a recession, albeit a much shallower one than the Bank of England and Office for Budget Responsibility saw.”

Growing optimism over the growth outlook for 2023 will bolster the case for those policy makers at the Bank of England arguing that more tough action will be needed to tame double-digit inflation. Markets currently expect the Bank of England’s benchmark lending rate to peak just below 4.5%. Investors are paring their bets on significant increases despite signs of resilient demand.

A stronger economy could keep inflationary pressures higher even as the squeeze on households is eased by the downward trend in natural gas prices. City of London forecasters have upgraded their expectations for UK growth in the latest survey by Bloomberg. In the new forecasts, economists expect a 0.9% contraction in 2023, 0.1 percentage points better than the previous month.

—With assistance from Andrew Atkinson.