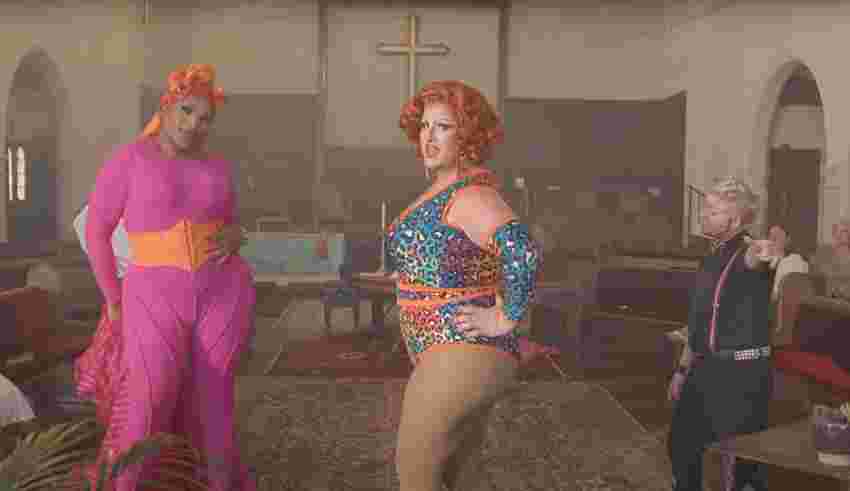 PORTSMOUTH, OH – Oh, yes – there is a battle raging for the ravishing of the bodies, minds, and souls of children, the future generation of citizens. Adult males (trans, homosexual, heterosexual) with painted faces are targeting children. And anyone that stands up and speaks out for the protection of children is branded as transphobic, homophobic, or hater.

Gay people, drag queens, and trans individuals are not being targeted. Drag queens in places and spaces that belong to children are being exposed for indoctrination and hyper-sexualization.

Battle for the Body

Twerking tush in front of toddlers is sexualization. Kinking on kindergarten kids with fake breasts and bum cheeks hanging out is indecent exposure. So, adult males in costumes are granted permission to act out sexually in public places as long as they hide behind the label of being fun and fancy drag queens. Perversion performed in the company of innocent children is touted as artistic expression.

What children see – they will do. So, when kids in daycare, pre-school, and kindergarten sing and shake private body parts in front of others, how will teachers and parents respond? When kids start touching classmates inappropriately, how will adults respond? When kids demand to wear outlandish clothing and caked on makeup to school, how will parents/guardians respond?

Body boundaries are being eroded as children watch and role model adults disrespecting the human body during disgusting dirty dancing acts of depravity. And children witness parents, librarians, teachers, and other adults they trust – sanctioning grooming behaviors. It’s sexual exploitation upon the most innocent of our society.

Battle for the Mind

The predators are planting seeds under the guise of diversity and inclusivity. And gullible or gender-bender parents are swallowing the bait. Without clueless or woke parents, drag queens could not invade libraries, schools, and public venues for access to children. Without complicit librarians and school staff, drag queens could not invade safe places and spaces designated for children. And school boards that sanction gender ideology and indoctrination for children through perversion are guilty as charged.

“Let’s be clear, the injection of drag queens into children’s consciousnesses goes beyond innocently sitting in a classroom reading storybooks. Kids are being brought to performances that are marketed as kid-friendly, despite being, in many cases, sexually explicit,” asserts a 2022 article in The Washington Examiner.

Battle for the Soul

“It’s important for Christians to show love and kindness even to people who don’t hold the same values as them, but they aren’t supposed to condone the things that God frowns upon, even if society is dictating otherwise,” Czarina Ong writes in a 2017 article for Christianity Today. Ong reported on a story where a church was challenged over holding a drag queen competition for LGBTQIA kids.

“Will drag queens in the pulpit become “mainstream” in the United Methodist Church (UMC)?” asks a 2022 article in The Christian Post. In a Facebook post, Pastor Andy Oliver of UMC wrote that Isaac Simmons, invited to deliver a sermon in drag as “Ms. Penny Cost,” was “an angel in heels appearing to shepherds in the fields on the night shift, telling them that Good News had arrived on their doorstep.” Watch video clip of Simmons wearing a wig and a black sequin dress with black wings during the service.

“Drag Queen Puts Out Music Video Mocking Biblical Christianity and Singing About Indoctrinating Children,” is a 2022 article in The Dissenter. A drag queen and Derek Webb from Caedmon’s Call, a Christian band, released a music video mocking Christianity. Drag queens in hideous attire sing and dance as their lyrics lecture and chastise the people in the pews. Watch the depravity and desecration on YouTube.

Battle for the Children

“Across the nation many public schools are violating the most basic duty they owe to parents and children: honoring parents’ rights over the education, care, custody, upbringing and control of their children. They are doing so by exercising a pervasive and malign influence over impressionable young people in grades Pre-K through 12, sexualizing them, confusing them into believing their birth genders are changeable at will…,” asserts a 2022 commentary in Townhall by Jonathan Emord.

It is not a hate crime to proclaim that no adult (male or female) should be twerking and jerking in front of children while wearing skimpy outfits, dramatized makeup, wigs – outlandish caricatures mocking females while pretending to entertain. It is not discrimination to proclaim that the indoctrination of children by adult males in costumes is inappropriate.

It’s the responsibility of parents to teach children about biology and sexuality – not drag queens. And parents need to approve any curriculum on sexuality that is taught in schools.

This issue is not about LGBTQ+ at all. Gays Against Groomers is a coalition of gay people who oppose the recent trend of indoctrinating, sexualizing and medicalizing children under the guise of “LGBTQIA+.”

The drag queen Kitty Demure stated, “What in the hell has a drag queen ever done to make you have so much respect for them and admire them so much? Other than put on makeup and jump on the floor, and writhe around and do sexual things on stage? I have absolutely no idea why would want that to influence your child. Would you want a stripper or a porn star to influence your child? It makes no sense at all. A drag queen performs in a night club for adults. There is a lot of filth that goes on, a lot of sexual stuff that goes on. And back stage, there is a lot of nudity, sex and drugs. So, I don’t think that this is an avenue you would want your child to explore.” By the way, Demure’s Twitter account has been suspended.

Of course, not all drag queens are pedophiles or sex offenders. The following are some of the criminals that got caught:

“A child drag performer who was mentored by an accused child sex offender will perform at an Oregon bar. An eleven-year-old child who performs drag under the name Vanellope will perform at Old Nick’s bar in Eugene, Oregon,” according to a 2022 article in Breitbart.

In a 2022 article, The Daily Caller reported, A Pennsylvania drag queen, Brice Patric Ryschon Williams “was charged with 25 counts of child pornography, according to a criminal docket…Video footage shared on Instagram from 2017 appears to show Williams dancing explicitly for children. In July, a local Pennsylvania news outlet reported that Williams would be working with an organization that provides a “safe space” for gay and transgender children of color.”

The Houston Public Library in Texas admitted that one of its “Drag Queen Storytime” storytellers was a registered child sex offender. The library said in a statement it “failed to complete a background check as required,” leading to a man posing as a drag queen, according to a 2019 article in Newsweek.

“At least three Texas sex offenders have participated in “Drag Queen Story Time” — programs that seek to teach children about gender fluidity and give them “queer” role models through reading events in public libraries,” reports Metro Voice News in 2019.

However, there are pedophiles that hang around children’s events that have never been arrested or they have been arrested in the past and charges were dropped.

So, how does a parent know if the drag queens at the events where they take their children possess a criminal history or record? Ask the sponsors if the drag queens had to pass a background check. Ask for the names and search the Internet and peruse their social media platforms. Check the sex offender list in your state.

The bottom line: adult males in drag have no business entertaining children in bars and parents that allow it need consequences. And drag queens need to stay out of schools and libraries as well.

A leading pro-family activist organization, MassResistance provides the information and guidance people need to confront assaults on the traditional family, school children, and the moral foundation of society. You can find a list of groups around the country that prevented drag queen events for children.

Residents can contact the Library Board of Trustees, Library Commission, the City Council, and the County Board of Commissioners in their area as well as local newspapers, radio stations, and social media; circulate a petition; and engage in peaceful and respectful demonstrations if drag queens come to their towns.