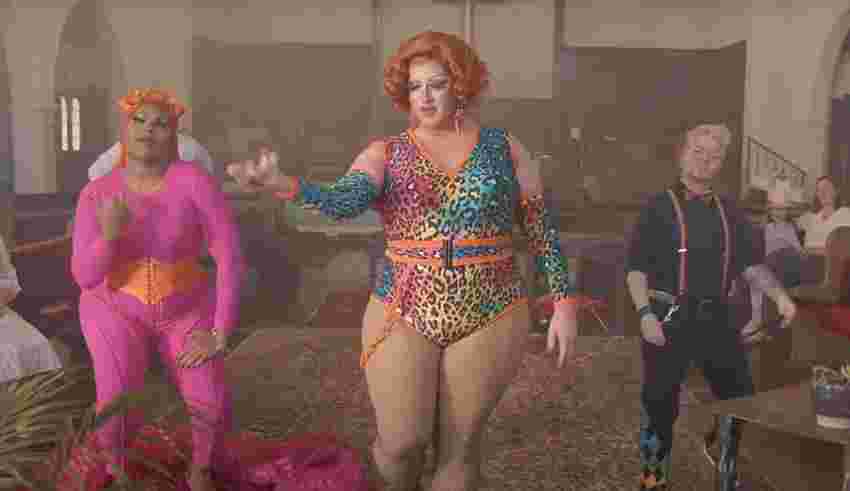 PORTSMOUTH, OH –  Upfront let me proclaim that God loves sinners so much that he died on the cross for them. And we are all sinners saved by grace. Nonetheless, modern-day drag queens (DQs) are not satisfied sitting in the pews listening to church services – drag queens want to be behind the pulpit and on center stage in outlandish attire with wacky wigs, caked on makeup, and high-heels as they prance, pray, and preach transgenderism and gender ideology to the young and the old. They deny science-based biological sex. They deny that God created a male to be a male – and a female to be a female.

Furthermore, the purpose of gathering in a Christian church building is to praise and worship God – not for entertainment by adult males (trans, homosexual, or heterosexual) dressed in dreadful drag. It’s an act of apostacy.

It’s a progressive plan of the trans community to invade the foundations of society. The goal is transgenderism in the home and hearts of children and families and the erosion of faith and freedom. DQ’s in churches, schools, libraries, and other public places decry censorship and discrimination when opposed.

DQs have the option of attending LGBTQ+ churches with LGBTQ+ pastors and leaders, but instead they are choosing to infiltrate traditional Christian churches. The brazen proponents of Queer Theory are proud to spread the falsehood of transgenderism in churches across the USA and around the world as drag queens engage in hyper-sexualization and dances of depravity in front of children.

“It’s important for Christians to show love and kindness even to people who don’t hold the same values as them, but they aren’t supposed to condone things that God frowns upon, even if society is dictating otherwise,” Czarina Ong writes in a 2017 article for ChristianityToday. Ong reported on a story where a church was challenged over a drag queen competition for LGBTQIA kids.

Throwing slurs, profanity, and nasty names at DQs is not appropriate nor should it be how Christians respond during protests or on social media. Yes, it is depravity, debauchery, and deception in the church, but we need to speak truth in love. “But where sin increased, grace increased all the more.” (Romans 5:20, NIV)

“Drag Queen Puts Out Music Video Mocking Biblical Christianity and Singing About Indoctrinating Children,” is a 2022 article in The Dissenter. A drag queen and Derek Webb from Caedmon’s Call, a Christian band, released a music video mocking Christianity. Drag queens in hideous attire sing and dance as their lyrics lecture and chastise the people in the pews. Watch the desecration on YouTube.

Delusion is pervasive in the church. “Woe to those who call evil good and good evil, who put darkness for light and light for darkness, who put bitter for sweet and sweet for bitter.” (Isaiah 5:20, NIV)

Parents that expose children to the indoctrination and sexualization of DQs in church are deluded. The enemy of God has hoodwinked the people into believing what is evil is good. And the children will suffer by questioning their biology and identity. The wickedness of sin has blatantly invaded the houses of worship. But the wickedness is welcomed – and the tomfoolery is celebrated.

“Tennessee Tech investigating ‘disturbing’ campus drag show mocking Christianity in front of kids,” reports a 2022 article in The Christian Post. “The school’s action comes after a video posted to social media showed a drag performer dancing suggestively to the song “Take Me to Church” by Irish singer-songwriter Hozier and making the sign of the cross. He then removes his brown cloak to reveal a corset-type outfit underneath. Watch the disgusting video on Twitter.

“Will drag queens in the pulpit become “mainstream” in the United Methodist Church (UMC)?” asks a 2022 article in The Christian Post.

In a Facebook post, Pastor Andy Oliver of UMC wrote that Isaac Simmons, invited to deliver a sermon in drag as “Ms. Penny Cost,” was “an angel in heels appearing to shepherds in the fields on the night shift, telling them that Good News had arrived on their doorstep.” Watch the video clip of Simmons wearing a wig and a black sequin dress with black wings during the church service.

Making a DQ the center of attention at a church service instead of God is an act of apostasy and the pastor and church board need to be taken to task. Will the people in the pews stay or go?

Albert Mohler, president of Southern Baptist Theological Seminary located in Kentucky, spoke out against the acceptance and promotion of the DQ agenda.

Mohler continues, “This is open revolt, and of course, you’re going to see a division between those who are appalled by it, deeply troubled by it, deeply concerned by it and opposed to it on the one hand, and those who celebrate it and say that it’s arrived far too late on the other hand.”

On his podcast called The Briefing, Mohler stated, “An intentional refutation and revolt against the very order of creation that God has given us,” and a “direct violation of the clear teachings of Scripture concerning the fact that those whom God has made as men should identify as men [and] those whom God has made as women should identify as women.”

And there’s the goal of the fallen angel called Lucifer, Beelzebub, Devil, Satan. Corrupt, destroy, and change what God created. Blur the lines between male and female and distort sexuality and gender. Satan is sneaky, sly, and slimy. “For our struggle is not against flesh and blood, but against the rulers, against the authorities, against the powers of this dark world and against the spiritual forces of evil in the heavenly realms.” (Ephesians 6:12, NIV)

“Drag queens reading to children in church, pastors denouncing sexual purity, congregants being told to apologize for the color of their skin. The past few years have seen churches across the country take a dramatic theological turn, abandoning traditional Christian values in favor of progressive secular ones,” writes Michael Austin in a 2021 commentary for The Western Journal.

“A seminarian at St. Luke’s Lutheran Church of Logan Square in Chicago led children in a service last Sunday dressed in drag “to reflect on a joy that overflows so abundantly,” the church announced on Facebook, according to a 2021 article in Breitbart. The video is no longer available. Hmmm, I wonder why.

“images of blood sacrifices, skulls, and Pentagrams, all with half-naked men posed with the drag queen.”

You can find a tweet by the Church of Satan that says, “We can confirm that there are a lot of Satanic drag queens. And they are fabulous.”

Is the above reference to Satan a joke?

“Are they serious about following Satan? Who knows, and who cares? Anyone who adopts his name is, tragically, fair game. Satan will exploit and manipulate these fools to his hearts’ desire, and they may never know it,” surmises an article at the HNewsWire website.

The bottom line is that Christians are being bamboozled by demonic forces as they accept the gender ideology touted by DQs and allow them to parade in front of children and families in places of worship. Of course, not all DQs are self-proclaimed demons or covert Satanists.

Some DQs are Woke and some are trying to justify their immoral lifestyle by vomiting transgenderism on the church. Some DQs have childhoods full of abuse and trauma.

Moreover, DQs need to know that salvation and grace is available to them because God is merciful, forgiving, and loving. But a day is coming when our merciful God will put on the robe of judgement.