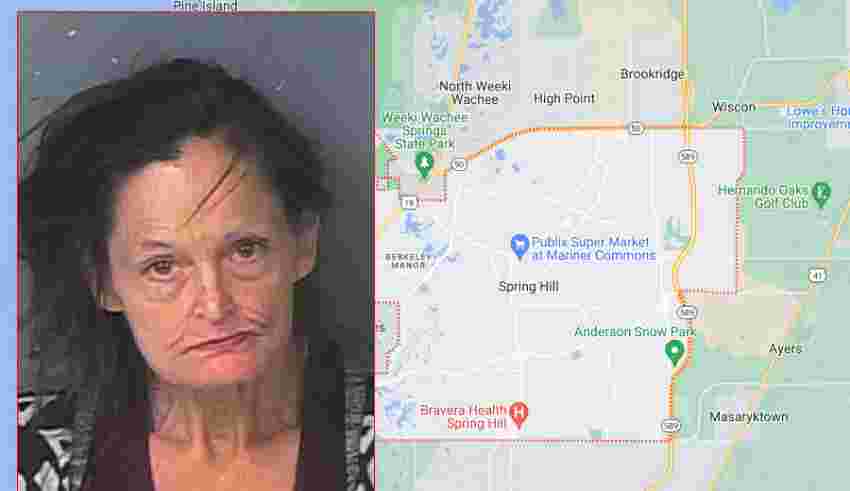 According to authorities, while driving through the parking lot, two deputies observed a silver Ford Taurus which was double parked on the north side of the parking lot.  As the store was not open for business, the deputies checked what they referredto as a suspicious vehicle.

Upon approaching the vehicle, deputies observed a white female, slumped over in the driver’s seat. In order to check the female’s well-being, the deputies called out to her and knocked on the driver’s window several times. Eventually, the female became somewhat alert and opened the driver’s door. During this time, the female was very lethargic and demonstrated difficulty gaining her senses.

The female, and sole occupant of the vehicle, was identified by her Florida ID card to be 50 year-old Danielle Marie Richards. When asked if she was “ok,” Richards told the deputies she was and was just taking a nap.

While conversing with Richards, the deputies observed a syringe, filled with a red liquid substance, on the passenger seat. A second syringe was observed on the floor board, behind the driver’s seat. Based on their observations, the deputies had Richards exit the vehicle so a thorough search could be conducted.

A search of the vehicle revealed a black nylon zip-up bag, which had been placed in the engine bay, next to the vehicle’s battery. Inside the bag, deputies located several plastic bags which contained a crystal-like substance and a powder-like substance.

Based on the items located in the vehicle, Richards was placed under arrest and charged with possession of methamphetamine, trafficking in fentanyl, possession of drug paraphernalia and possession of a controlled substance.