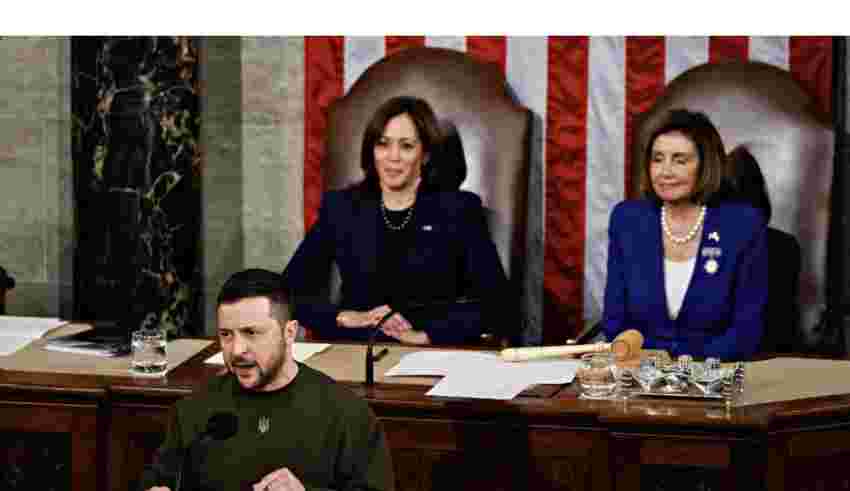 (Bloomberg) — Ukrainian President Volodymyr Zelenskiy pressed the US Congress for tanks, planes and more money to help repel Russia’s invasion, portraying the war as a battle of democracy against tyranny as he sought to win support from some skeptical Republican lawmakers.

In his first trip abroad since President Vladimir Putin’s forces invaded Feb. 24, Zelenskiy told a joint meeting of Congress Wednesday evening that US support had been crucial so far and predicted the year ahead will turn the tide in the war. He called for more sanctions and demanded that Russians responsible for the war be brought to justice.

“Your support is crucial, not just to stand in such a fight, but to get to the turning point to win on the battlefield,” Zelenskiy said in a 27-minute speech that was repeatedly punctuated by standing ovations by lawmakers from both parties. “Your money is not charity, it’s investment in the global security and democracy that we handle in the most responsible way.”

The speech, delivered after Zelenskiy met at the White House with President Joe Biden, was aimed as much at ordinary people around the US and the world as it was at the lawmakers who were present. The applause was loud and raucous, befitting the broad bipartisan support Zelenskiy has garnered, even as Republicans who are set to take control of the House of Representatives next month promise tougher scrutiny of the aid going to Ukraine.

The applause was tepid from some Republicans who are opposed to more aid, such as Representatives Matt Gaetz and Lauren Boebert, while others clapped but didn’t join the frequent standing ovations that punctuated the remarks.

As a sign of America’s support, the Biden administration announced $1.85 billion in additional military aid to Ukraine on Wednesday, including a Patriot missile battery to help the country bolster its defenses. At the White House, Biden told Zelenskiy the American people were with him “every step of the way,” and “we will stay with you for as long as it takes.”

That Zelenskiy made the visit — conducted under heavy security and requiring a train journey to Poland to avoid flying in Ukrainian airspace and risk being shot down — underscores the increasing urgency to secure more weapons and money to fund the conflict. He said he had laid out to Biden a ten-point peace initiative, though he didn’t give further details.

“If your Patriots stop the Russian terror against our cities, it will let Ukrainian patriots work to the full to defend our freedom,” Zelenskiy told lawmakers, in reference to the high-tech air defense system Biden promised to send him.

He said Ukraine has artillery and shells but said: “Is it enough? Honestly, not really,” adding, “I assure you that Ukrainian soldiers can perfectly operate American tanks and planes for themselves.” It was a rebuttal to US officials who have argued that some advanced weapons would require too much training.

Early responses to the speech were positive. Senator Rob Portman of Ohio, a leading Republican supporter of Ukraine, said it will help Zelenskiy in his quest for fighter jets and tanks. Portman, who’s retiring from Congress, said he’s confident the House will provide more aid next year as long as accountability is in place for the funds.

“I thought he did a beautiful job, laying out in very stark terms what the stakes are,” Portman said of Zelenskiy. “He was also in his own way saying, ‘Give us some more help and we can achieve victory.’”

Since the start of the war, with help from the US, NATO members and other allies, Ukraine has dealt Moscow repeated defeats on the battlefield and driven troops back from territory first seized when tanks rolled toward Kyiv. But Russia is regrouping, targeting civilian and energy infrastructure and leaving millions of people without power or heat in the winter. Zelenskiy has repeatedly demanded more weapons than he’s been given so far.

As part of his effort to pry loose more funds and equipment, he used the speech to portray the battle against Russia as a defense of state sovereignty and democracy.

“This struggle will define in what world our children and grandchildren will live in,” he told US lawmakers, addressing them in English, dressed in his familiar olive-green sweatshirt and cargo pants. “It will define whether it will be a democracy for Americans, for Ukrainians, for all.”

At the end of the speech, Zelenskiy turned and gave Vice President Kamala Harris and House Speaker Nancy Pelosi a Ukrainian flag signed by soldiers he’d met a day ago on the front lines. In exchange, Pelosi gave him a folded US flag that had flown Wednesday above the US capitol in honor of his country.

Before Zelenskiy touched down in Washington, Putin vowed that there would be “no limitations” on military spending for the war. His defense minister said Russia would expand its army by more than a quarter to 1.5 million men as it pursues its military aims in Ukraine.

While Zelenskiy has thanked allies for support, he at times has berated leaders for being too reluctant to arm the Ukrainians who he says are fighting Russia, and dying, on their behalf.

“It was a call to action,” Senator Jeanne Shaheen, a New Hampshire Democrat, told reporters. “There are going to be a few people who are not going to support aid just like there always are, but the majority of members on both sides of the aisle will be very supportive.”

—With assistance from Erik Wasson and Roxana Tiron.